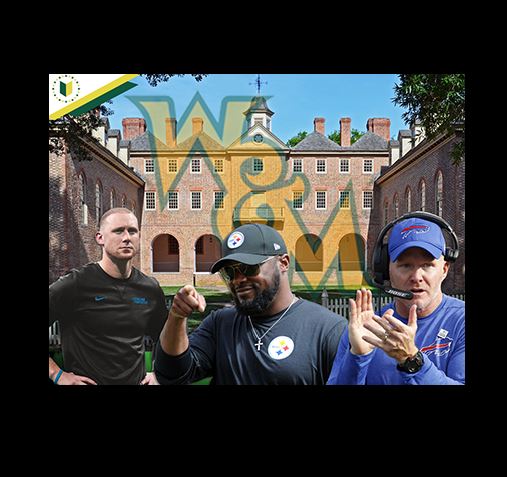 Since we’re halfway through the NFL season, we thought it would be a good time to do a #TribeinthePros check-in.

Forget schools claiming that they’re “DB University” (known for cranking out NFL-caliber defensive backs) or “WR University,” William & Mary is making a name for itself as “Coach University” of the NFL.

Just look at the current successes of Mike Tomlin, Sean McDermott, and Joe Brady, and you’ll soon find out why it’s fair to call W&M “Coach U.”

Currently, NFL teams headed by William and Mary alumni are 13-2.

Want to know the best thing about it? All three coaches played under former Tribe Head Coach Jimmye Laycock.

Defensive Rankings: 1st in the NFL (286.3 yards per game allowed)

Lets give credit where credit is due. Mike Tomlin is a top-3 coach in the NFL.

During his career, Tomlin is 139-74-1, which includes a Super Bowl victory and eight postseason appearances.

Another crazy stat for you: in his 14 years at the Steelers’ helm, Tomlin has yet to post a losing season; he has had a winning season in 10 of his first 13 years (excluding the current season).

This season, Coach Tomlin and his Steelers currently stand as the only remaining undefeated team in the NFL (7-0) — coming off a massive win against the arch-rival Ravens.

Tomlin, now known as a defensive-minded coach following his days as a HOF W&M wide receiver, boasts the best defense in the NFL.

The Steelers are the cream of the crop in the NFL, and Tomlin deserves much of the credit.

Coach McDermott is yet another NFL head coach/Tribe alum making his presence known in the NFL.

McDermott was hired by the Buffalo Bills three years ago, joining a team that had not made the playoffs for 17 straight seasons prior to his arrival.

In just three seasons, McDermott has brought the Bills to the playoffs twice, including in his first season with the Bills.

McDermott is currently 31-25 as a head coach; last season was perhaps his best yet, as he led the Bills to a 10-6 record that culminated in McDermott’s nomination for NFL Head Coach of the Year.

This season, the Buffalo Bills find themselves in 1st place in the AFC East, nearing the top of the NFL with a 6-2 record.

Coming off a big victory against the now-hapless Patriots (yes, you also read that correctly), Buffalo is “sitting pretty” atop the AFC East.

While McDermott has many years to go before he gets to Tomlin’s level, he’s certainly trending in the right direction.

Joe Brady took the football world by storm last season when he helped lead LSU to an undefeated season and national title, while also propelling QB Joe Burrow to a Heisman win and a selection as the #1 pick in the NFL Draft.

Because of his impact at LSU, Brady landed a job as Offensive Coordinator of the Carolina Panthers, making him the youngest active OC in the entire NFL — at the ripe age of 30 years old.

Lets take a look at how his offense has performed through the first 8 weeks of the NFL Season:

While the numbers aren’t mind boggling, let’s remember this: Brady is still learning.

He is just 31 years old. He lost arguably the most electric player in football, running back Christian McCaffrey, just a few games into the season — and hasn’t had him since.

His creative play calling and propensity to get the most out of players on his roster has NFL analysts saying that he is likely a “one and done” coach in Carolina.

In fact, most recently on Thursday Night Football, Hall of Famer Troy Aikman stated, “I don’t think Joe Brady will be here very long because he is the hottest coach in football right now.” High praise, to be sure.

If Brady were to land an NFL head coaching gig this offseason, it would mark three active NFL head coaches from W&M, the most of any one school in the league.

Not bad for a small, academic school in Williamsburg, VA, huh?

While Houston-Carson is not an NFL coach, we couldn’t pass up providing an update.

Houston-Carson, a 6th round draft pick of the Chicago Bears in 2016, is beginning to flourish in the professional ranks.

A special teams guru for “da Bears” up to this point in his career, DHC has had his chance to play at safety this season due to a couple injuries — and it’s safe to say he has made those moments count.

In fact, in back-to-back games against the Tampa Bay Buccaneers and the Carolina Panthers, Houston-Carson came up with game winning plays.

In the Tampa Bay game, DHC delivered the game-winning pass break up, on, yes, future Hall of Famer Tom Brady — giving the Bears the win over the Bucs.

The following week, DHC was responsible for picking off Carolina Panthers QB Teddy Bridgewater late in the fourth quarter, resulting in another win for the Bears.

DHC is certainly making an impact in the NFL, and we think he’s bound to get more playing time as the season goes on.