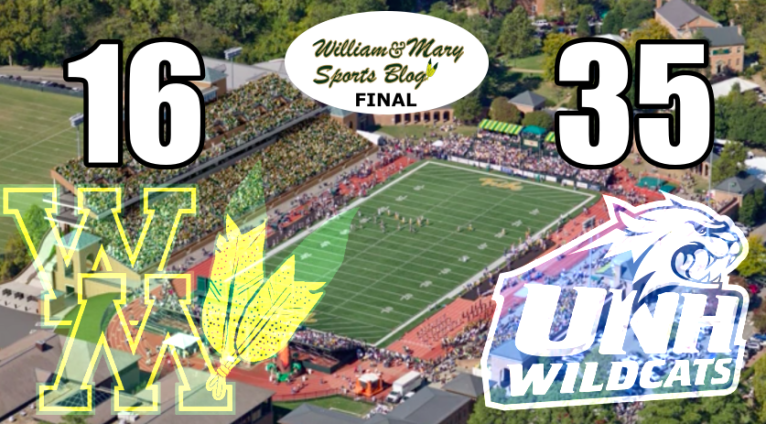 Another week, another loss for your William & Mary Tribe. #19-ranked UNH came into Williamsburg, dominated from the get-go, and walked away with a 35-16 victory. This actually broke a streak that W&M had, which we explain below. The Tribe moves to a paltry 2-7 (0-6 CAA)…officially making this a season to forget. So rather than bore you with multiple articles about football this week, we’re combining this article to include both our recap of last weekend’s game vs. New Hampshire and our preview of this week’s game vs. Towson all in one article — a two for one special! We’ll instead spend our extra time writing a Basketball preview article, which will be published this week. That’s right — W&M men’s basketball starts on Saturday! Roll Damn Tribe.

JMU did was it has done all year, that is, blowing away FCS opponents (and FBS ones, too). JMU now boasts a 21-game winning streak, dating back to last season, which is the longest in all of D-I college football. Stony Brook picked up up another CAA victory, and now is an impressive 7-2 on the year. Richmond came up with a surprising shutout victory over Villanova. And it somehow took Elon 2 OT’s to beat a lowly Towson Tigers team. Elon remains undefeated in the CAA, setting up quite the showdown of potential undefeated CAA teams in the final week for the CAA crown (JMU and Elon play each other on 11/18). 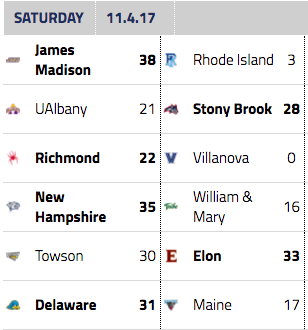 Next week’s contest likely provides W&M its best chance for the team’s first CAA victory of the season (and last?), as the Green and Gold takes on the Towson Tigers. Below is quick snapshot of where the Tigers stand this season.

If W&M wants to secure its first CAA victory, we think the best way to do it is to establish the running game. Towson ranks dead last in the CAA in rush defense. Led by running quarterback Tommy McKee and two stud running backs in Nate Evans and Albert Funderburke, W&M shouldn’t have a problem establishing the run game. Towson’s offense is much like the Tribe, and has been anemic all year long. They rank second to last in scoring offense, averaging just 15.2 points per game. The only team worse? Your W&M Tribe, which averages 14.6 points per game. Ugh, why do we torture ourselves so. Expect a low-scoring, affair in this one, but also expect the Tribe to come out on top. LET’S GO TRIBE.