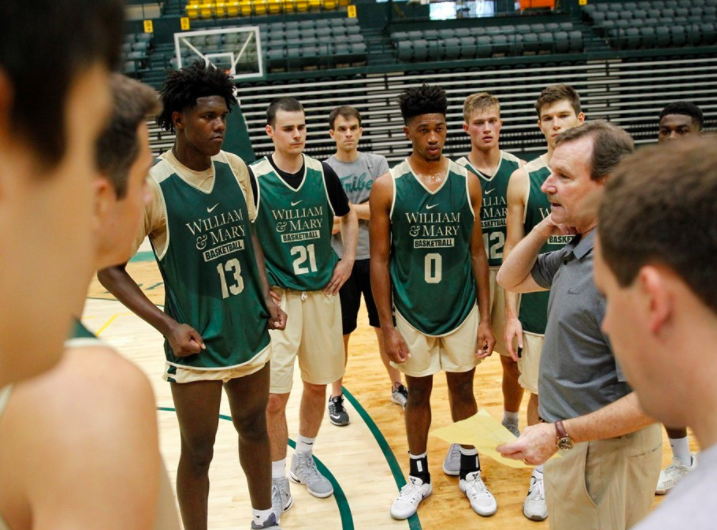 THE SEASON OPENER IS THIS WEEK! You read that correctly: William & Mary men’s basketball begins its quest for the CAA crown this Friday when it opens on the road at High Point. But this isn’t the same Tribe team you’re used to. In fact, far from it. Senior captains Omar Prewitt and Daniel Dixon have graduated. Multiple players have transferred. Two have transferred in. And of course, there are freshmen.

We’ve never seen this much turnover in the offseason. But, as we say with Coach Laycock, #InShaverWeTrust. Head Coach Tony Shaver has produced multiple CAA Championship appearances over the past several seasons. In fact, W&M has qualified for nearly half of them over the last decade, appearing in four in the last 10 CAA Championships.

But the elephant in the room remains: W&M is one of four original Division I teams that has never qualified for the NCAA Tournament, dating back to the 1948 season when the “Division I” concept first came into existence. The other “Sad Four” schools joining the Tribe are the Citadel, West Point, and St. Francis Brooklyn. Despite that fact, we can think of no coach more deserving than Coach Shaver to bring his team to the promised land. And while this year may very well be a reloading year for the Tribe, it’ll be an important one nonetheless. Let’s get to it; it’s time to get you ready and preview this year’s squad.

Oh, we mentioned that people transferred this offseason, right? In our original projections, we at the Blog had Greg Malinowski and Jack Whitman pegged as sure-fire starters on this year’s team. However, with Malinowski’s subsequent transfer to Georgetown, and Whitman’s transfer to Kansas (he has since left the Jayhawks), the Tribe was left with the cabinets fairly bare — most notably at the “big-man” position. With the offseason moves, our new projected five is below.

[Projected Starter] #34 David Cohn, Redshirt Senior, Guard (6’2”, 168): Already named a captain last season, David Cohn will be one of the go-to leaders on this year’s squad. An electric player who can get up and down the court in a flash, Cohn has been the Tribe’s leading assist-man for the past two seasons since transferring in from Colorado State. In what will be his third and final season with W&M as a senior, look for Cohn to expand his role as more than just an assist man, and more of a scorer in 2017. [Projected Starter] #2 Matt Milon, Redshirt Sophomore, Guard (6’5”, 195): A couple years ago, Milon transferred to William & Mary. Due to NCAA rules, he sat out all of last season while practicing with the team. In his freshman year, appearing in 30 games for Boston College, he checked in with 3 starts, ending the season averaging 5.4 points per game, 1.4 rebounds, and 0.5 assists per game, and around 17 minutes a contest. You may be thinking to yourself: “5.4 points a game, are you serious? Why are they so excited?” To start, how many of you remember what David Cohn’s freshman year stats were at Colorado State when he transferred to the Tribe? Don’t remember? Cohn averaged 15 minutes per game, 3.9 points per game, and 0.9 assists per game. And that was at Colorado State, and they play in the Mountain West Conference. Now that’s not a knock on the MWC, but it sure isn’t the ACC. The sharp-shooting Milon might be just what this Tribe offense needs to get going beyond the arc this season, and we’re excited to see what the kid can do. [Projected Starter] #22 Paul Rowley, Redshirt Junior, Forward (6’8”, 200): Last season, Rowley earned the “Most Improved Player” award, and for good reason. Averaging just 2.4 minutes per game in his redshirt freshman season two years ago, Rowley managed just 1.0 points per game. After proving himself early last season, Paul saw his minutes sky rocket to 16 minutes per game, while averaging 5.4 points per game. A tall, lanky forward, Rowley really found his touch from behind the 3-point arc this season, connecting on 38 three pointers. A great example of his abilities came in the final game of the season in the CAA Tournament vs. #1-seeded UNCW, where he finished with 9 points on three 3-point shots, the vast majority of which coming in the first half. In more of a full time role this season, look for Rowley to expand those scoring totals into the double digits. [Projected Starter] #13 Nathan Knight, Sophomore, Forward (6’10” 235): Coming into the year as the Tribe’s only returning big man from a season ago, much will be expected out of Knight in his sophomore campaign. Finishing last year on the CAA All-Rookie Team, the 6’10” behemoth will more than likely see a large bump in minutes this season following the transfer of Jack Whitman. A beast on the defensive side of the court, Knight finished 2nd in the CAA in blocks while averaging 8.2 points per game. We’ll look for Knight to expand his scoring prowess this season, as he should easily finish with double-digit point totals, and several 10+ rebound games. [Projected Starter] #23 Justin Pierce, Sophomore, Forward/Guard (6’6”, 205): One could call Pierce “Omar Prewitt 2.0.” After watching Pierce’s high school highlights, his athletic abilities immediately jump out. He can dribble the ball all the way up the court through defenders, go up for the monster slam, and even jack up the deep three. Pierce is a player that should fit in perfectly with the offensive system that Head Coach Tony Shaver has in place. Averaging just 10.7 minutes and 3.7 ppg in his freshman campaign, Pierce still finished with 10+ points four times. Look for Pierce to contribute big time in the points column this season.

William & Mary Head Coach Tony Shaver has already gone on record this offseason saying this is perhaps the best shooting team he has coached while in Williamsburg. That’s high praise from a coach that has been at the school since 2003. But while this team may be stacked at the guard position, it is far from deep in the post. Behind the aforementioned Nathan Knight is a 6’11” graduate transfer in Cole Harrison, checking in from Dartmouth. Cole’s career at Dartmouth was all over the board, and unfortunately, much of it was defined by whether or not he was healthy enough to play — never averaging more than 2 points per game. However, when he did play, he showed flashes of brilliance that reminded everyone why he belonged. Standing at 6’11” 245 pounds, his frame is quite literally made for a defensive style of basketball. Harrison and Knight’s play will be paramount for the Tribe this season.

Overall, it remains to be seen how this roster will hold up throughout the year; depth in the post is a big question mark. But with some luck shooting the ball, the Tribe’s offensive prowess may prove enough to keep it in most games, stealing some contests in the process.

Of course, W&M will also play the usual CAA suspects, matching up against all of them twice. But picked to finish 8 of 10 in the CAA, the Tribe has its work cut out for them. Charleston comes in as the heavy favorite this season, with Towson and Elon close behind. This year’s W&M Gold Rush game will include a matchup against the Delaware Blue Hens, who are picked to finish 7 in the CAA, just one slot above the Tribe.

The High Point Panthers last faced off against the Tribe during the 2015-2016 campaign. It was a nail-biter, one that saw the Tribe fall in overtime, 78-75; it’s safe to say the Green and Gold will be looking to avenge that loss in Friday’s game in North Carolina. But even though the Panthers finished last season with an average record (15-16), W&M will be on the road. Any way you slice it, it’ll be interesting to see how Coach Shaver deploys his guys in the first game of the season. Roll Tribe Roll.