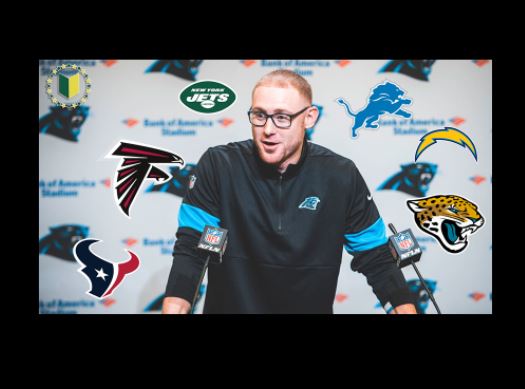 Will he stay or will he go? That’s the question Carolina Panthers fans are asking about their up-and-coming Offensive Coordinator, W&M alum Joe Brady.

As most in the W&M community know by now, Joe Brady has taken a rocket to the moon over the past few years, vaulting his way up the coaching ranks at a pace largely unheard of.

And with two Head Coaches from W&M already in the NFL — Mike Tomlin (Pittsburgh Steelers) and Sean McDermott (Buffalo Bills) — the small, academic school out of Williamsburg has a chance to make history.

But what else is new; this school is used to making history.

At the age of 30, and a year after winning college football’s Broyle’s Award, which annually honors the best assistant in the college game, Joe Brady was hired as the Offensive Coordinator of the Carolina Panthers this past offseason.

With quarterback Cam Newton newly off the team, Brady inherited an offensive unit with weapons — but one that was in need of a refresh.

The Panthers boast arguably the best running back in the NFL in Christian McCaffrey, but due to injury, McCaffrey only played in 3 games this season.

Even with the offense in rebuild mode and without its best player for the vast majority of the season, the team started better than many had predicted — winning 3 of its first 5.

However, the Panthers would struggle down the stretch, finishing 5-11 on the year; but without one of the most dynamic offensive playmakers in the NFL on the field, perhaps this was to be expected.

Panthers quarterback Teddy Bridgewater finished #17 in the NFL in passing yards (about middle of the pack), McCaffrey’s backup running Mike Davis finished #31 in rushing yards, but most impressively, wide receivers DJ Moore (#11) and Robby Anderson (#15) finished top-15 in the NFL in receiving yards.

In fact, of the top 15 receiving yard leaders this season, only one other team had two or more pass catchers make the list. Can you guess who?

This is all to say, NFL teams have taken notice of Brady’s ability to maximize the potential of his personnel — especially in the passing game.

And despite a relatively mediocre year for the boys from Carolina, Brady’s name is being called on as a serious head coach candidate this offseason.

As anyone following pro football knows, nothing makes a GM or NFL owner salivate more than a young, hungry, offensive-minded head coaching candidate.

Suffice to say, many head coaches were let go this season; but with all that churn, more opportunity now presents itself for the young Brady.

Below, we rank what we think are Brady’s best options.

Our Take: With the worst statistical defense in the NFL, Brady would need to find an experienced Defensive Coordinator to seriously help on that side of the ball. Really though, that goes for just about every team on this list — but perhaps even more so with the Lions. QB Matt Stafford still has some productive years left, as he’s only 32 years old; moreover, the Lions have a couple noteworthy receivers that Brady could build off of. But with the defense in complete shambles and Aaron Rodgers posting MVP numbers in the NFC North, we don’t love the Lions’ prospects in the near future. This rebuild won’t be easy.

Our Take: The Falcons boast an established, albeit aging 35 year-old quarterback in Matt Ryan who has Super Bowl experience (just don’t remind Atlanta fans of that game). With incredible receivers in Julio Jones and Calvin Ridley, Joe Brady would have the opportunity to create an absolutely lethal passing game in the Peach State. But with little cap space and an aging QB already locked in place, Brady wouldn’t be given the personnel flexibility that other head coaching vacancies currently provide.

Our Take: With tons of cap space, the #2 draft pick in this year’s draft, and three second/third round picks, the Jets have several things to look forward to. But that’s just it. There isn’t much already going for them. With the worst statistical offense in the league, a dearth of weapons on both sides of the ball, and questions surrounding QB Sam Darnold’s future, this won’t be an easy turnaround. Not to mention, both the Bills and Dolphins are on the rise in the AFC East. And oh yeah, Bill Belichick is still in New England.

Our Take: An incredibly attractive choice for a young, offensive-minded coach, the Chargers should really be a top choice for any head coach candidate this offseason. The only drawback is, you read it, having to play against Patrick Mahomes for the next decade. Mahomes shows no signs of slowing down, and offensive mastermind head coach Andy Reid just might coach until he’s 95. This isn’t to say that another team in the AFC West can’t have success, but having to play the Chiefs twice a year, every single season, isn’t an inviting proposition.

Our Take: An incredibly tough choice when comparing the Texans to the Chargers — this selection came down to Herbert vs. Watson. Yes, Herbert had an incredible rookie season, but Watson is already a proven commodity. He perfectly emulates the dual-threat quarterback who can run and pass, leading the league in passing yards this season. The rebuild here would be tough, especially given minimal cap space and non-existent draft capital; Brady’s #1 role coming in would be to convince Watson to stay, but it can be argued that Brady has the tools to turn around this Texans team, starting by building out an elite offense centered around superstar Deshaun Watson.

Our Take: Wow, the Jags are ranked #1 in something? Yes, despite the massive amount of work that needs to be done in Jacksonville, the Jaguars have the most tools at their disposal to get the job done. Armed with massive cap space, 5 early draft picks this year alone, and the potential to draft the best college QB since Andrew Luck, Joe Brady and Trevor Lawrence could become a deadly NFL tandem for the next decade or more. As stated, it won’t be easy, but the ability to quite literally build a team to your liking from the ground up is an incredible opportunity that doesn’t come along often.