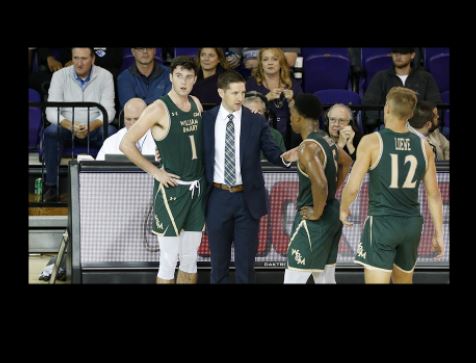 We never thought we’d be announcing that in the year 2020, but your Green and Gold will open the season against ODU this Saturday at 7 PM.

Now, this isn’t the same Tribe team of years past.

With the Twin Towers (Nathan Knight and Andy Van Vliet) lost to graduation, the Tribe will trot out its youngest squad in quite some time — a squad that includes eight underclassman.

But we know its been a while since we last saw W&M play some basketball — so let’s get you ready for the season!

In this article, we highlight where the Tribe currently stands, project starters, and highlight opening games.

A year after posting the program’s highest win total since the 1949-50 season, William & Mary was picked to finish dead last in the CAA in 2020.

Yes, you read that correctly: dead last (welcome to the year 2020). However, the selection isn’t really all that surprising.

But to add insult to injury, William & Mary also did not have any players selected to the Preseason All-CAA first and second teams; however, Luke Loewe (10.7 PPG) did gain selection to the CAA’s preseason honorable mention team.

Despite the perceived lack of respect for W&M in the 2020 preseason polls, it’s important to note that preseason ranks are entirely meaningless.

A season ago, William and Mary was picked to finish 7th in the CAA. So naturally, what happened?

The Tribe ended up with the the program’s most wins since 1949 and secured the #2 seed in the league/CAA Tournament.

But with this year’s ranking, it’s also important to note that, for the Tribe, there’s only one way to move: up.

The Tribe this Season

To say that the Tribe is young would be an understatement. Currently on the roster, W&M boasts just two seniors — and only one has played on a regular basis (Luke Loewe).

Outside of these 5 players, there exists very little game experience on the Tribe squad.

Of the 14 players currently on the roster, 8 are underclassman (3 sophomores, 5 freshman).

While the future may be bright and while we love the younger players, there will certainly be growing pains; it will likely be several weeks before the Tribe figures out its long-term starting five.

Now, we turn to that very subject: our projected starting 5. And this year, especially compared to prior years, it is no easy task.

Will the Tribe go small? Will they trust an inexperienced Ben Wight to start? Is there a freshman (or two) that will get serious playing time?

We’ll likely see a bunch of movement in the starting group as the year goes on and as Coach Fischer and his staff get to know their team.

Leave us a comment if you disagree with our projected lineup or if you think we are missing something! Interested to hear thoughts.

Loewe is the most experienced player on this team; we project him to take on a big leadership role this year.

Beyond his offensive abilities, Loewe is a superb defender.

Look for Loewe to have an even better season in his senior year.

When it’s all said and done, we wouldn’t be surprised if he made the CAA’s All-Conference team (as well as the All-Defensive team).

Blair was a role player last year, but will likely be given an everyday starter role this season.

But he’s not entirely unproven; Quinn showed promise last season, posting 5 games in which he scored in the double digits.

And Blair really came on late last season, which bodes well for his overall development heading into the offseason and 2020.

Blair gives 100% effort every time he takes the floor, and we’re looking forward to seeing how he progresses this season.

Scott was an interesting player last season. He cam out firing: in W&M’s first game (against High Point), he dropped 22 points on 8/12 shooting.

He promptly followed that performance with a 13-point outburst against American.

Eventually, he would suffer an injury that forced him to miss the final nine games of non-conference play.

After scoring in double digits in 3 of the first 4 games, Scott would go on to post only 3 more double-digit scoring performances the rest of the season (through 15 games).

We think a healthy Scott will return to form this year. Scott is a sharp-shooter; he can make a 3 from literally anywhere on the court.

If he can stay healthy, we predict Scott to become the highest scorer on the squad by year’s end.

When you hear Ayesa, think: shooter. Akin to a Julian Boatner or Connor Burchfield.

Ayesa finished second on the team in three-point shooting last season (37.3%), behind only Luke Loewe (43.9%).

He was as consistent a player as they come for the Tribe off the bench last season.

Ayesa flashed his sharp-shooting ability in spurts throughout the season (4/4 and 12 points vs. Wofford, 5/5 and 14 points vs. Delaware, 4/6 and 12 points against UNCW), converting on a few clutch threes along the way.

This season, we’d like Ayesa to develop his short to mid range game to complement his 3 point ability.

Remember Burchfield his senior season, when he developed this skill.

If Ayea adds that to his game, the sky is the limit for this budding star.

Wight is raw. But he might just play a big role this year.

Last season, where Coach Fischer had Nathan Knight and Andy Van Vliet, FIscher had the luxury of allowing Wight to sit a year, bulk up, and learn from some of the best to put on the Green and Gold uniform.

In his redshirt freshman season this year, we expect Wight to step into a starting role for the Tribe.

He is the tallest player on the roster (standing 6’9″); we’ve heard rumblings about his athletic abilities, and we think he will become the starting center on this year’s offense.

Much remains to be seen on Wight, but if any of the hype is true, Fischer has a promising young big who has both an entire year of W&M experience and four years of eligibility remaining.

The Tribe has a shorter out of conference (OOC) schedule than in years’ past (thanks coronarvirus), with just 9 games before CAA play.

The highlights of the OOC schedule include games at NC State, at George Washington, and at UVA.

The Tribe will also play its yearly game against ODU, which begs the question: why don’t we yet have yearly games against W&M’s old CAA rivals, Richmond and VCU?

We think that’s coming, but we’ll give Fischer and co. a pass this year due to COVID restrictions and overall shenanigans.

In any regard, this young Tribe team will be tested early and often in the OOC schedule before CAA play.

This year, instead of the usual schedule cadence, each team will play each other twice in one weekend.

The schedulers didn’t do William and Mary many favors, as the Green and Gold’s first six games come against the preseason top-3 ranked teams (2 vs. Hofstra, 2 vs. Delaware, 2 vs. Drexel — in that order).

We ‘re hoping a strong OOC schedule will have W&M prepared and ready to go once CAA season hits.

So buckle up, get your popcorn ready, and root on your W&M tomorrow against ODU.