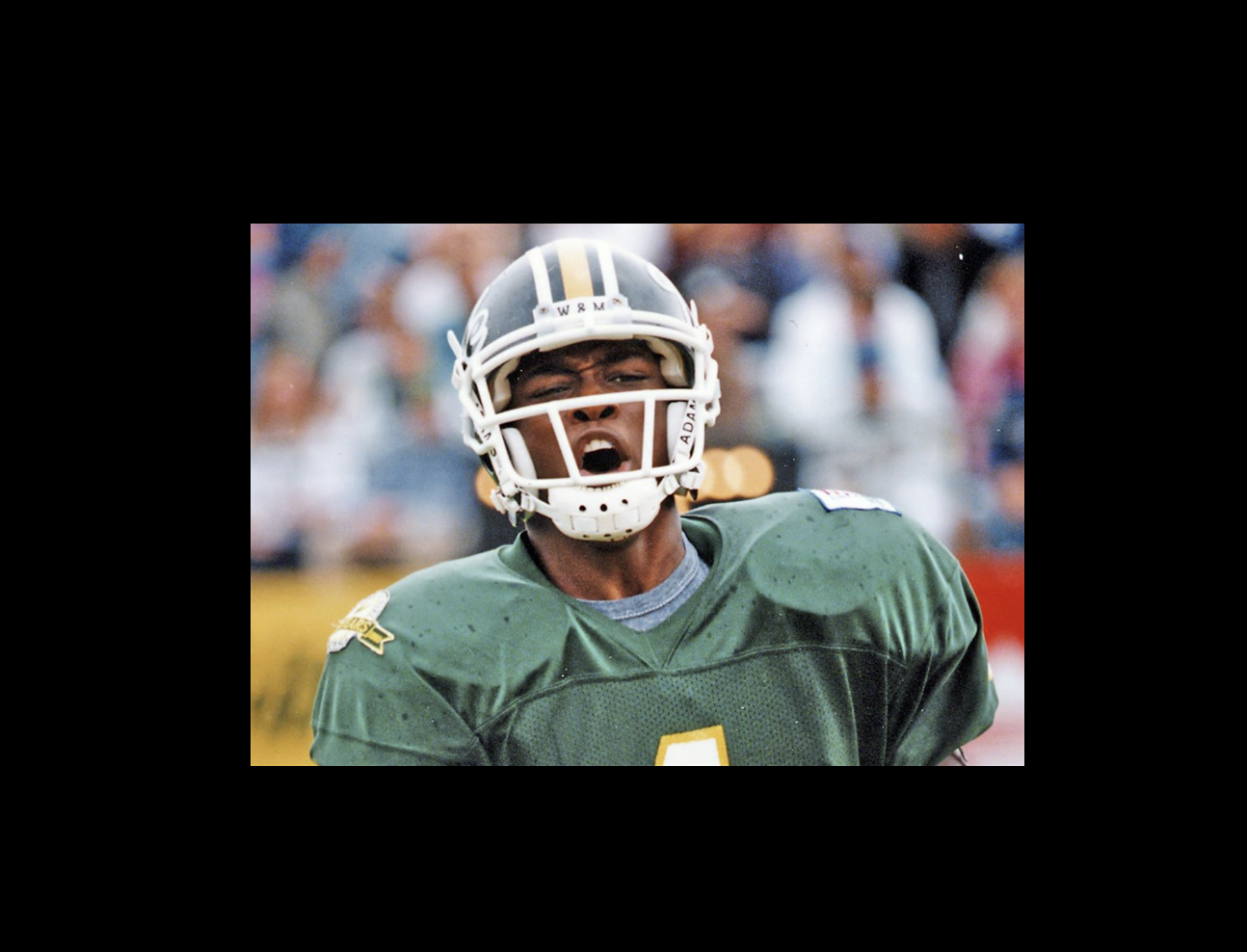 When you think of NFL Head Coaches, what do you think of? Individuals with advanced coaching pedigrees, perhaps.

They probably attended a big football school, and even experienced success at the professional level during their playing days.

While those are the stereotypes, they’re not always true. Fun fact: two NFL coaches (out of the mere 32 that exist in this entire world) attended the College of William & Mary.

For a “small academic school” with an FCS program, that’s one pretty incredible statistic — and one that certainly doesn’t happen by accident.

One of those aforementioned NFL Head Coaches is W&M alum Mike Tomlin (’95), whom we all know as the Head Coach of the Pittsburgh Steelers.

Below, we detail Tomlin’s path to the NFL, dating back to his playing days at…you guessed it: William & Mary. Roll Tribe Roll.

Mike Tomlin grew up in the great state of Virginia, in Newport News.

Proving to be outstanding athlete in high school, he chose William & Mary specifically because of its academic prowess and athletic reputation — two reasons we continue to hear W&M student athletes describe today.

In an interview, Tomlin reminisced about his days in the ‘Burg,

“On a day-to-day basis, [William & Mary is] a proving ground. I think that’s why so many young people that come to this university and through this athletic department are successful in whatever they choose to do.”

During his illustrious career with the Tribe, Tomlin was a three-year starter at wide receiver, donning the number 4.

He would go on to become an all-time great, finishing his career with 101 receptions, 2,046 yards, and 20 touchdown receptions.

Due to his success on and off the field, Tomlin was ultimately inducted into the William & Mary Hall of Fame in 2012 — forever etching himself into the annals of Tribe football lore.

Following his graduation from W&M in 1995, and perhaps unsurprisingly, Tomlin has spoken fondly of his former Head Coach, Jimmye Laycock.

“I love Coach Laycock, I love him now; I loved him then.” said Tomlin.

“He [Laycock] had a quiet confidence about him. He was very professional. His passion for the game showed through even though he was a somewhat reserved personality. I wanted to be like him, and that’s probably one of the reasons I got into professional coaching.”

Tomlin has also stated that the Tribe will always hold a special place in his heart: “Because of my experiences [at William & Mary], the people I met, the way I was able to grow personally, I feel a sense of obligation [to the Tribe].”

In 2008, Tomlin served as the primary speaker during W&M’s commencement ceremony.

A month later, he returned to the ‘Burg to help dedicate the Jimmye Laycock Football Center. Below is a video of Tomlin talking about life as a William & Mary alum.

Tomlin’s first 5 years of coaching was spent with 4 different teams. He first started as a wide receivers coach (the position he played at W&M) for VMI in 1995.

The next year he worked as a graduate assistant at the University of Memphis, where he was a defensive backs and special teams coach (marking his switch to defense).

Tomlin was then hired by Arkansas State University in 1997 to coach defensive backs, before ultimately being hired by Cincinnati as defensive backs coach, from 1999-2000.

After 5 years coaching at the collegiate level, Tomlin made the jump to the NFL in 2001 when he was hired as the defensive backs coach for the Tampa Bay Buccaneers.

Perhaps just as important, in Tampa, Tomlin was able to work under well-known coaches such as the aforementioned Tony Dungy, as well as Jon Gruden, gaining invaluable experience that served him well moving forward.

Tomlin would serve as the defensive backs coach for Tampa Bay from 2001-2005. Over that span, the Buccaneers led the NFL in Total Defense (in 2002 and 2005), with Tampa Bay’s defensive unit never ranking worse than 6th in the NFL.

In fact, the team won the Super Bowl in 2003 — a game in which the Buccaneer defense notched a Super Bowl record five interceptions, three of which were returned for touchdowns by Tomlin’s DBs (they won 48-21 over the Oakland Raiders). Wow.

After five successful years as the defensive backs coach in Tampa, Tomlin was hired as the Defensive Coordinator of the Minnesota Vikings in 2006.

Here’s another fun fact: when Tomlin was hired as the D-Coordinator of the Vikings, two players on the team were older than Tomlin.

In 2006, the Vikings finished with the NFL’s 8th best defense, ranking as the top-ranked run defense.

After just one season with the Vikings, in 2007, Tomlin was hired by the Pittsburgh Steelers to be their 16th Head Coach.

Tomlin replaced the legendary Bill Cowher — it’s safe to say that he has never looked back.

During his first season as Head Coach, the Steeler’s had the top-ranked defense in the NFL…noticing a theme yet?

In fact, Tomlin would go on to set a Steelers Head Coach record by notching 22 wins over his first two years at the helm.

Tomlin was named the 2008 NFL Coach of the Year. On February 1st, 2009, he became the youngest Head Coach to win the Super Bowl at age 36 when the Steelers defeated the Cardinals in Super Bowl XLIII.

In 2010, Tomlin would lead the Steelers back to the Super Bowl, for the second time in three years, but would lose the game to Aaron Rodgers and the Green Bay Packers, 31-25.

Finally, and more recently in 2017, Tomlin became the 3rd coach in NFL history to finish with a .500 or better record in his first 10 seasons with one team.

The only other coaches to do that are John Madden (with the Raiders) and Curly Lambeau (of course with the Packers) — good company to keep, right?

What he’s done for the Steelers has been nothing short of incredible. Even better, he continues to perform at a high level with the Steelers, continually vying for the AFC crown year after year.

We at the W&M Sports Blog couldn’t be more proud to call him one of our own, and we look forward to seeing him back in the Super Bowl soon.