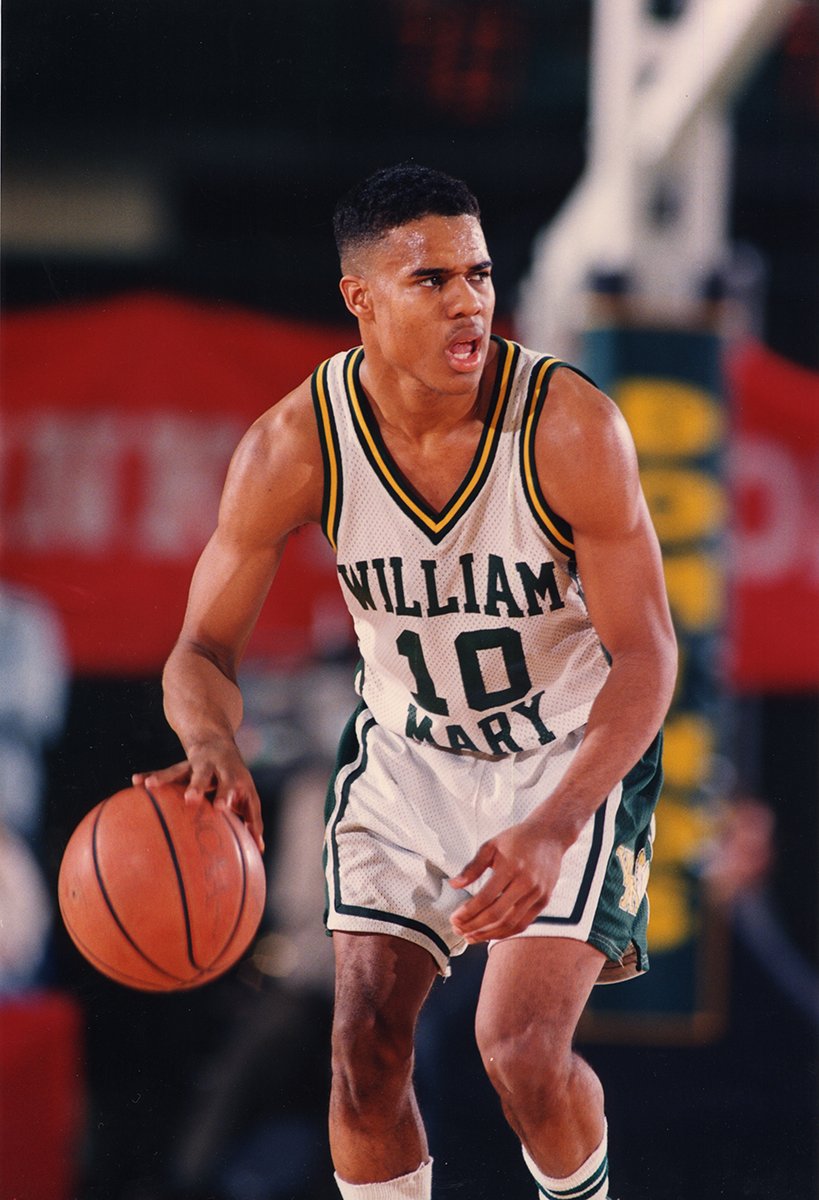 Well folks — it’s official! Another W&M alum made waves in the sports world, this time in college basketball. In April 2018, David Cox (’95) agreed to become the Head Coach of the Rhode Island Rams to the tune of a five-year deal worth $700,000 a season. That’s a good chunk of change, if we do say so ourselves. Well done, Coach!

But despite Coach Cox’s success, many Tribe fans, especially younger ones, and even some of the older guard, might not know about him. If that’s the case, don’t worry — we at the W&M Sports Blog have you covered. Roll Tribe Roll.

Life in the ‘Burg

The first 3 years of Cox’s career donning the Green and Gold were under Head Coach Chuck Swenson, who in his time at W&M amassed an unimpressive 62–134 overall record (27-71 CAA). In Cox’s sophomore year, the team would however finish tied for 4th place in the league, with a 14-13 overall record — the highest finish the team experienced over Cox’s 4 years. In case you’re wondering, Charlie Wollum came in as Head Coach for Cox’s senior year — who by the way, is the current color commentator for W&M men’s basketball, alongside Jay Colley.

Despite never finishing a season averaging more than 8 points per game, Cox, a Landover, MD native, would go on to become a four-year varsity letter-winner for W&M Tribe Basketball, finishing with several Tribe records that still stand to this day. His career stats include impressive totals in several statistical categories, including 3-point field goals made (6th all-time, 137), total assists (8th, 336), and 3-point field goal percentage (9th, .352).

He also notched a career-high 12 assists against George Mason in 1995, which to this day ranks 3rd among all-time single-game performances in W&M basketball history. Impressive. So although W&M basketball was experiencing a dry spell while he was in the ‘Burg, Cox certainly boasted talent on the court. In the end, his time in the ‘Burg would springboard him into the coaching world, ultimately landing as the Head Coach of the Rhode Island Rams.

Oh by the way, Cox would also go on to receive his Masters in Education at W&M. This is important in his story, and something we surely wouldn’t want to gloss over.

To assist us describe his coaching progression, we’ve tapped into the University of Rhode Island’s bio on Cox, which you can find at this link:

Cox entered the college ranks as the director of basketball operations at Pittsburgh for the 2006-07 season and was part of the Panthers’ staff that went 29-8 and advanced to the Sweet 16 of the NCAA Tournament…From 2007-10, Cox served as an assistant at Georgetown, helping to guide the Hoyas to a trio of post-season appearances.  In 2007-08, Georgetown compiled a 28-6 overall record en route to winning the Big East Championship and earning a #1 seed in the NCAA Tournament.  The 2009-10 Hoya squad also won 28 games and en route to an NCAA Tournament appearance…

[He would then move to] Rutgers; Cox was the Scarlet Knights’ associate head coach, helping the program recruit the 15th-best class in 2011.  He served as the interim head coach for a three-game stint in December 2012, guiding RU to a 3-0 record…”

Following his four-year stint at Rutgers, Cox would go on to join Rhody in May of 2014. At Rhode Island, Cox joined a staff led by Head Coach Dan Hurley, who was in his 3rd season at the helm back in 2014. Each season that Cox spent under Hurley was a winning one for the Rams; in the 2017-18 season, the team notched an incredibly impressive 26-8 (15-3 A-10) record, finishing as the regular season A-10 champions. That same year, Rhode Island defeated Oklahoma in the First Round of the NCAA Tournament before falling to Duke in the Second Round.

With all that success, it was unsurprising to see Dan Hurley hired away to UConn in the following offseason, where he was tasked with rebuilding a once mighty basketball powerhouse. And with that hire came an opportunity for David Cox, who was officially named the next Head Coach of the Rams on April 4, 2018.

We at the W&M Sports Blog couldn’t be more excited to see one of the Tribe doing it big at the college basketball level. A couple other former players come to mind in the college coaching ranks, but it is Coach Cox who is blazing the trail for others to follow. We wish the best of luck to Coach moving forward, and will surely continue to keep close track of his career moving forward — Let’s go Rhody and LET’S GO TRIBE!!!