It was another up and down week (or should I say “down and (then) up” week?) for your W&M Tribe. But any way you look at it, your Green and Gold is still sitting atop a crowded and competitive CAA. There are certainly kinks that Tony and the boys need to work out, but this team has the talent to knock out any team in the league with hot shooting on any given day. Problem is, the team’s defense is still very suspect.

Despite that, we feel good about where W&M currently stands, especially in boasting the best offense in the league — however, there’s plenty of basketball still to be played before this is all said and done. Check out our analysis of this past week’s games below! Roll Tribe Roll.

WMSB Analysis: In what would be the Tribe’s second game of the year against the preseason-ranked #2 Towson Tigers, the contest would go down to the wire. W&M forward Justin Pierce may have turned in his best performance of the season, as the sophomore knocked in an eye-popping four 3-point shots in the first half alone (finishing the game with

27 points). At the half, W&M led by 10 points, with Pierce (16 points) and Connor Burchfield (11 points) leading the way. However, as we have seen too many times than we’d prefer this season, W&M’s Nathan Knight got into foul trouble. In the contest, Knight would play a mere 18 (of 40) minutes. At this point in the season, it’s safe to say that Knight is the best all-around player on the team; he’s currently ranked 6th in the CAA in scoring (18.5 per game) and 2nd in the CAA in blocked shots (45). Oh, and did we mention he’s 6’10”? The longer Knight stays on the court, the better the odds are for the Tribe. And in this one, having him foul out of the game in the 2nd half with only 8 points really hurt.

But we’re not putting it all on Knight. The Tigers made some very tough shots down the stretch, broke the Tribe’s defense, and forced the game to overtime — with the contest tied 79-79. In overtime, W&M could only muster a meager 3 points (total), while Towson would go on to score 17 (that’s a 17-3 overtime score, folks). Game over. Ouch. This was a contest that saw the Tribe up by 10 at the half. Unfortunately, it ended with Knight in foul trouble, a lackluster defensive performance for the Tribe, and the Tigers reminding everyone who was picked to be the 2nd best team in the CAA this preseason.

Stats-wise, we were impressed that the Tribe out-rebounded a team that is quite literally known for beating teams on the boards. Unsurprisingly, Towson was able to have its way with the Tribe’s bottom-dweller defense, shooting a very high 57.8% from the field, with a respectable 37.5% from three. W&M’s numbers weren’t too shabby either, shooting 43.2% from three — but when it mattered most, the Tribe wasn’t able to get it done. The 18-9 turnover ratio certainly didn’t help either. 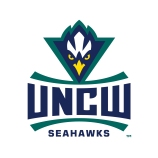 WMSB Analysis: The Tribe found itself on the road for the second time in a week, facing off in the defending champ UNCW’s raucous Trask Coliseum. W&M was again treated to some hot first-half shooting in this game, this time from Connor

Burchfield, who finished the first half with 15 points (on 5/8 from three). About 6 minutes into the first, the Green and Gold built a lead, and led 40-31 at half. Unfortunately, W&M’s Nathan Knight again got in foul trouble, and his backup Cole Harrison did too. At the half, Knight had 2 fouls and Harrison had 3. Not the way you want to start out the game.

However, cooler heads prevailed in the second half, as Knight was able to play the majority of the second half without fouling out. It was a second half that saw the UNCW Seahawks mount two big-time runs to bring life back into the game for the hometown team. The first stint included a 9-3 run, pulling UNCW within reach, down just 43-40. But the Tribe kept up the offense. Despite the effort, the Seahawks crawled back, down just 72-68 with 3:44 remaining. In the end, both Paul Rowley and Connor Burchfield hit a pair of clutch three-point shots to propel the Tribe forward to victory in front of the defending champs.

W&M shot an impressive 55.8% from the field, to go along with 40% from three-point land. A stat we’re not used to seeing is the opposing team out-shooting the Tribe from three, but that’s what UNCW did on Saturday, shooting 41.4% of their three-point shots. Rebounding-wise, UNCW boasts the best rebounder in the league in Devontae Cacock, who finished with 15 rebounds (he averages an insane 13.3 a game) — so no surprise there. In all, we were impressed with the grit that W&M showed on the road. Keep in mind, this was a team that finished with a 3-12 record on the road last season. Already this year, the Green and Gold is 7-5 on the road (and 7-2 at home, #PacktheKap).

Key Stat of the Game: David Cohn became W&M’s all-time leader in assists in the win over UNCW.

William & Mary remains number 1 in all major offensive statistical categories. So although the Tribe’s offense is riding some historic highs, its defense is historically bad. It’s hard to remember the last time a Shaver-led team was ranked dead-last in defense in the CAA — not that Shaver is known to be a defensive coach (quite the opposite). Even still, expect better out of this team, as we truly believe the Tribe will only go so far as its defense will take them this year.

The preseason #1 team, Charleston, jumped up to tie W&M and Northeastern for 1st place in the standings. After handling the Tribe a week before, Northeastern graciously lost to the worst team in the league (Drexel) this past week. This leaves us with three teams (W&M, Charleston, Northeastern) tied for first place, one team (Hofstra) just one game behind, and two teams (Towson and Elon) just two games behind. The CAA is typically a tough conference to win, but this might be the most competitive we’ve seen it in the last ~7 years.

Next up for the