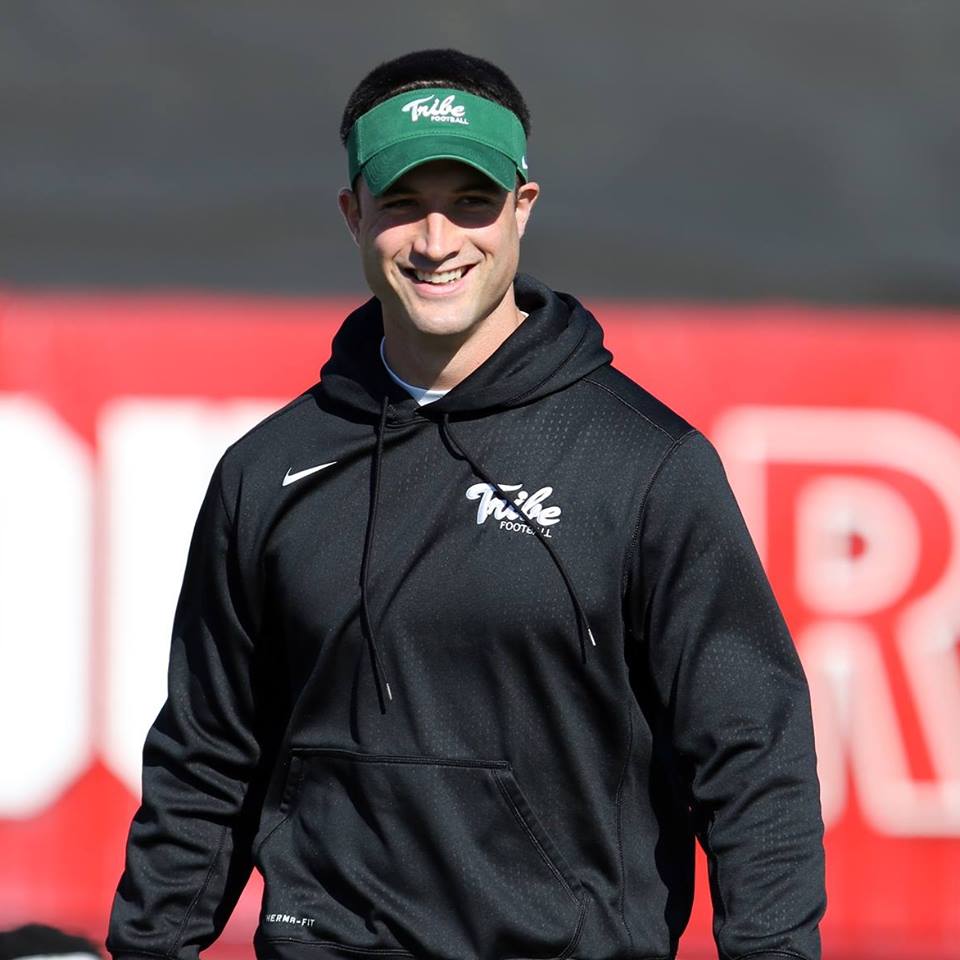 Is it REALLY ever too early to be talking about Tribe Football? Come on, you don’t have to think about it. The answer is a resounding NO. As such, we thought it would be fitting to profile the Green and Gold’s new Offensive Coordinator, DJ Mangas. At 28 years old, Mangas becomes the second youngest OC in Division I (FBS & FCS).

DJ has risen through the ranks quickly, to say the least, and for good reason. Wherever he goes, he exudes a humble confidence and winning demeanor that has made him successful in all of his prior coaching positions. It is now time to see what he can do as the newly minted OC of your William & Mary Tribe. Below, we highlight Mangas’ early coaching career, and road to the OC role. Enjoy! Roll Tribe Roll.

DJ attended northern Virginia’s Paul VI High School, where he became a three-year letterwinner and two-time First-Team All-WCAC quarterback. He finished his career at PVI with 4,176 yards and 36 touchdowns, finishing as a two-time honorable mention All-Met selection by the Washington Post. Oh yeah, and we almost forgot to mention he also played basketball and ran track.

Overall, Mangas was a perfect fit for Coach Laycock and the William & Mary Tribe. As many know, Laycock covets dual sport athletes, and Mangas found himself as the man for the job.

Playing Years in the ‘Burg

Despite posting impressive numbers as a Panther at PVI, Mangas did not earn a scholarship to W&M out of high school. He had to earn his way on the team. He started as a walk on, and eventually became a scholarship player after proving his worth to the coaching staff. Ask any walk on player — this is no easy feat. Nothing is given to you as a walk on, and quite honestly, if you are cut, you won’t get much sympathy. It’s a dog eat dog world, and in this world, Mangas proved himself to be nothing short of a Doberman, showing Laycock that he had what it takes to excel at the next level. Bet you never expected us to make that comparison, now did you? Hey, we have to keep you on your toes every now and then. But I digress.

It wasn’t long before Coach Laycock and his staff converted Mangas from quarterback to wide receiver. Seeing significant playing time his junior year, Mangas would go on to finish with 28 receptions and 233 yards, including a 7-catch, 53 yard performance at UNC.

In his senior year, Mangas started all 11 games, recording a team-high 45 receptions for 591 yards and 5 touchdowns. Not bad for a guy who played the position for the first time the year prior. Mangas ultimately received the team’s 2011 Inspirational Award, which is given to the player who exemplifies great leadership — foreshadowing strong character traits that would eventually land him the Offensive Coordinator position he now holds today.

After college, Mangas decided that he wanted to be a coach. Plain and simple. He started as a student assistant following his graduation from W&M, as he began working with the Tribe’s running backs and quarterbacks. From there, Mangas spent a year as the Quarterbacks Coach at Hampden-Sydney. During his sole year at Hampden-Sydney, the Tigers’ starting signal caller became a unanimous first-team all-conference selection, leading the league in passing yards, passing touchdowns and total offense per game. You’d have a hard time convincing us that Mangas didn’t play a large part in that player’s development.

Following his brief stint at Hampden-Sydney, Mangas became the Running Backs Coach at Georgetown in 2013. In his season at Georgetown, Mangas helped the Hoyas’ starting running back finish among the program’s single-season top-10 list in every major statistical category. First flexing his muscle with the quarterbacks at Hampden-Sydney, then the running backs at Georgetown, Mangas was showing a breadth of knowledge for the game that few others possess. It’s safe to say this experience set him up well for another run at it in the ‘Burg.

All of this success impressed Coach Laycock, who watched from afar before bringing Mangas back as the Tribe’s Running Backs Coach in 2014. Mangas would not disappoint. In each of his three seasons as the Running Backs Coach, the Green and Gold boasted players who reached the 1,000-yard rushing mark, with multiple Tribe running backs earned all-league selections. In 2014 and 2015, the Tribe earned two first team All-CAA selections in RBs Mikal Abdul-Saboor and Kendell Anderson.Under Mangas’ tutelage, both Abdul-Saboor and Anderson become the fourth and fifth all-time leading rushers at W&M.

After W&M Offensive Coordinator Kevin Rogers left the program this past year, Mangas found himself coaching the Tribe’s offense in this year’s Spring Game. Soon after, he was promoted to the Tribe’s Offensive Coordinator and Quarterbacks Coach position(s). On the promotion, Coach Laycock commented, “DJ is a bright young coach who has a lot to offer. I know he is going to work very well with the coaches we have assembled and continue to build on the foundation of offense that (former Tribe Offensive Coordinator) coach (Kevin) Rogers put together and put his own touches in as well.” We couldn’t agree more, and we’re excited to see what style of offense DJ cooks up for the Green and Gold this season.

Outlook for the 2017 Season

The sky is the limit for Mangas as Offensive Coordinator. But he’ll have some work to do. The offensive unit lost the dynamic duo of QB Steve Cluley and RB Kendell Anderson, as well as some key pieces on the offensive line. However, the Tribe returns almost all of its receivers from a season ago (sans Kevin Hart), as well as one of its captains and two time all-conference selection TE Andrew Caskin. The offensive line features multiple-year starters in LT Chris Durant and LG Connor Hilland, with freshman phenom turned Sophomore RB Albert Funderburke running behind them (if he’s healthy enough to start the year).

The biggest question mark for Mangas will inevitably be at the quarterback position, where there is currently a four-way battle between Tommy McKee, Brandon Battle, Dean Rotger, and Shon Mitchell. It will be a tight summer camp battle, to say the least; but any way you look at it, whoever wins the job will be in good hands with Mangas at the helm. Because if seasons’ past are any indication, whoever Mangas works with turns to gold. Let’s hope he has the Midas touch again this year, and for years to come. We’re rooting for you DJ! LET’S GO TRIBE!!!