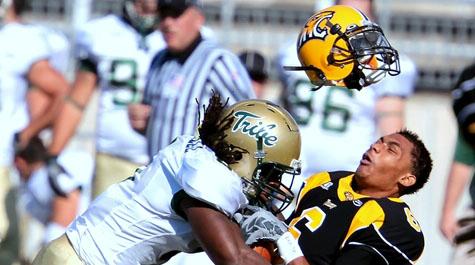 The Tribe picked up a big win on the road over #25 ranked Stony Brook last week, winning by the finally tally, 14-9. The W&M defense shut out Stony Brook’s offense for the second straight season, as the Seawolves’ only points came on a blocked punt for a TD, and a safety. It was also nice to get back into the win column after a loss the week before against Maine. Moving forward, William and Mary will look to defeat Towson this coming Saturday to procure its first 2 game winning streak in the CAA. A winning season is still very much in play for the Tribe, and we are hoping that these seniors can pull out 2 more wins!

Now, we turn our attention to this week’s matchup vs. the Towson Tigers at Johnny Unitas Stadium.

Last year, a 6-3 Towson squad traveled to Williamsburg for a big-time matchup with the then 7-2 Tribe. It was a momentous game for both teams, and especially for the CAA. But in the end, and luckily for Tribe fans, William and Mary defeated Towson by a score of 31-17 in Williamsburg.

This game may have been the best of QB Steve Cluley‘s career, as he finished an incredible 21-23 passing with 262 yards and 2 TDs with 0 INTS. Simply put: he was virtually unstoppable. The running duo of Kendell Anderson and Mikal Abdul-Saboor rushed for a total of 150 yards on the ground, while WR Kevin Hart added 40 yards receiving with 2 touchdowns.

The Green Swarm held Towson’s offense in check, as the Tigers could only muster a meager (how’s that for alliteration?) 3 points in the first half. The defensive unit also held Towson’s star RB Darius Victor to under 100 yards, led by W&M’s now-NFLer DeAndre Houston-Carson’s 12 tackles. Safety Mike Barta also added an interception as the Tribe D rolled.

This win proved to be a big one that earned William and Mary a claim of the 2015 CAA Championship. Had the Green and Gold beaten Richmond the week after, the Tribe would have won the CAA outright. However, we all know what happened in that one…but despite that fact, the Towson game was a big win against a solid opponent last season.

Towson currently ranks toward the bottom of the CAA this year and sits with a lowly 2-7 (1-5 CAA) record. That obviously does not sound impressive; perhaps you’re already predicting that the Tribe will steam roll the Tigers this Saturday. If that’s the case, you should really think again. Despite its record, Towson has been very competitive in all of its games this season. The Tigers lost on the road against powerhouse Richmond by only 3 points, lost to Stony Brook (a team that clobbered Richmond) by just 7, and Dartmouth by 3. If a couple more plays went their way in each of those games, Towson could be sitting at 5-4 on the year, with two big wins over Richmond and Stony Brook.

Instead, Towson’s two wins this season came against St. Francis, and last week against Elon. Side note: Elon still has not won a game since defeating the Tribe this year. Ugh. But we digress. Towson’s offense has actually been somewhat impressive this season, currently ranking 6th in the CAA in Total Offense, and 4th in the league in Passing Offense. To put that into perspective, William and Mary is ranked 7th in the CAA in Total Offense, just behind the Tigers. In terms of Total Defense, the Tigers rank 5th, and 3rd in Pass Defense. Again, William and Mary ranks 7th in Total Defense–a couple spots behind Towson.

To recap, the Tigers rank in the top half of the CAA in both offense and defense. The problem has been that they have not been able to put together complete-game efforts that result in wins. Regardless, this is not a team that the Tribe should take lightly; they are more than capable of defeating the Tribe come Saturday, and W&M will have to be all-systems-go to pull out a road victory in this contest.

Live stream on Towson’s website at 12:00 PM. Save the link here!

While Towson ranks in the top-6 in both offense and defense in the CAA, they rank second to last in Scoring Defense, giving up an average of 27.7 points per game. Therefore, we predict this to be a relatively high scoring affair. While William and Mary’s offense hasn’t been great, they have nothing to lose in this one. Let it rip! Roll Tribe!