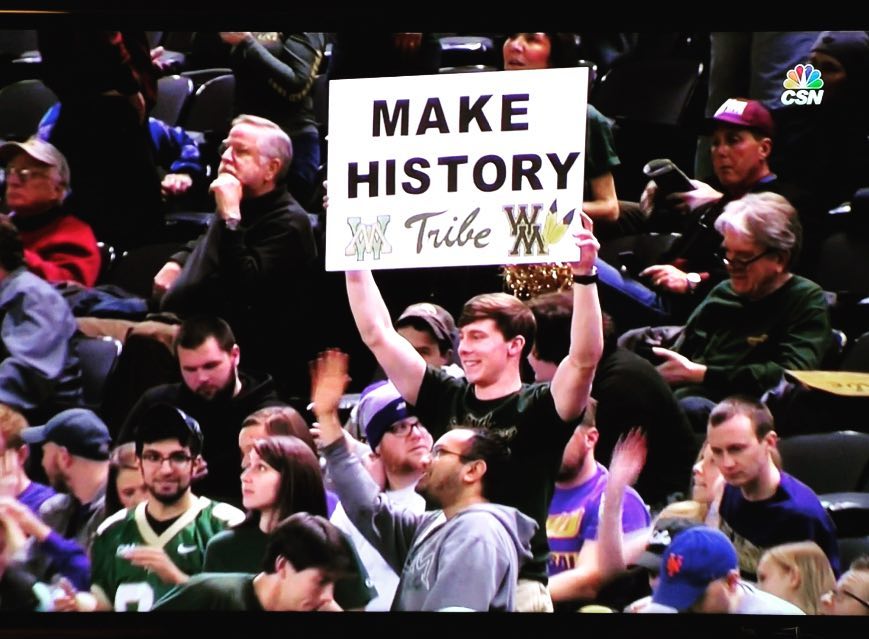 IT’S THAT TIME OF YEAR AGAIN! As football is winding down, basketball is turning up. The anticipation is real this year, as the Tribe finds itself led by two potential all-stars in seniors Daniel Dixon and Omar Prewitt. We all know the history. W&M is one of 5 original D-1 teams that have never made the NCAA Tournament. It’s sad, yes–in fact, they’re even called the “Sad Five.” But let’s change that, starting with the Season Opener on November 12th, THIS SATURDAY!

The Green and Gold have a golden (see what we did there?) opportunity to end the curse, procure yet another 20 win season, which would make it the 4th twenty-win season in a row (Hail Head Coach Tony Shaver), and finally qualify for some March Madness dancing. Oh, and in case you were trying to name the other 4 original D-1 teams that have never made the NCAA Tournament, here they are for your sports trivia repertoire: West Point, Northwestern, St. Francis Brooklyn, and the Citadel. Yes, it’s a fairly prestigious list of some academic giants, but this year, it’s time for William & Mary to make some history. #WeBelieve

[Projected Starter] #0 Daniel Dixon, Senior, Shooting Guard (6’6″, 210 lb): Daniel Dixon and Omar Prewitt are the undisputed leaders of this year’s team. Last season, Dixon was 2nd on the team in points per game, averaging 12.5 per contest. An absolute terror from 3-point land, he shot a red-hot 35.4% from beyond the arc to go along with his 40.1% shooting percentage from the field. He currently ranks 5th in Tribe history in 3-pointers made per game (2) and 3-point percentage (.395), and ranks 7th in 3-pointers made (168). Known for getting hot, Dixon hit the 20-point mark in four games last year, including a 24-point performance against basketball powerhouse Dayton on the road. Not only do we expect Dixon to contest for the most 3s and highest 3-point percentage in the CAA this year, but he should also crack the top-10 in blocked shots per game. An athletic freak on the defensive side of the ball as well, he checked in at #12 in the CAA in blocked shots per game last season, averaging nearly one a contest (0.7). If Dixon can consistently score the ball game in and game out, the Dixon-Prewitt will scare teams this season.

[Projected Starter] #4 Omar Prewitt, Senior, Guard/Forward (6’7″, 195 lb): Throughout his collegiate career, the accolades have continued to pile up for Omar Prewitt. He was named the CAA Rookie of the Year in 2013, before being named Third Team All-CAA in 2014, and finally earning First Team All-CAA honors last year in 2015. Known as a prolific scorer, Prewitt currently ranks 13th all time in scoring (1,361) at William & Mary. In fact, his 1,361 points are the sixth-most for a Tribe player through three seasons, so he certainly could see his overall scoring rank rise this season. He truly can do a bit of everything, as he also ranks in W&M’s all-time top-20 for assists, steals, free throws made, blocked shots, 3-pointers made, and much more. Put quite simply, he is the Tribe’s unquestioned go-to scorer. When Prewitt is hot, the Tribe wins. It’s usually as simple as that. This season, we expect Prewitt to vie for the CAA scoring crown and help in a big way to get W&M to the promised land.

[Projected Starter] #34 David Cohn, Junior, Point Guard (6’2″, 168 lb): A revelation last year, Cohn started his first full season with the Tribe after sitting out a year due to transfer rules (he transferred from Colorado State a couple seasons ago, and boy are we glad he did). If you had to draw up a point guard, you would draw up David Cohn. He started all 31 games at the position last season, finishing with averages of 9.6 points, 3.2 rebounds, and 4.6 assists per game. He actually ranked 2nd in the CAA and 93rd nationally in assists. But not only can he dish the ball, he can score the ball as well. A lightning-quick ball of energy, Cohn is regularly seen firing up not only his own players, but the crowd throughout each game. A magician with the ball, Cohn will have plenty of talent around him to work with this season. Expect his assists totals to rise this year.

[Projected Starter] #5 Greg Malinowski, Junior, Guard/Forward (6’6″, 210 lb): Playing in a reserve role last season, Malinowski averaged 18.8 minutes per game to go along with 7.7 points per game, 3.8 rebounds, and 0.8 assists. He really is a player with a good all-around game. He can get to the basket, come down with the big rebound, and shoot the occasional three. In the CAA semifinals vs. Hofstra last season, Malinowski really showed the Tribe what he can do. He finished with 22 points on an eye-popping 7 of 10 shooting, including a staggering 5-8 from 3-point range. With such a complete package, and after making 2 starts last year, we expect Malinowski to move into a starting role this season.

[Projected Starter] #41 Jack Whitman, Redshirt Junior, Forward (6’9″, 235 lb): Largely sitting beyond Sean Sheldon a season ago, Whitman takes over as the “Big Man” for the Tribe in his redshirt junior season. Last year, Whitman saw action in 23 games, averaging 13 minutes per contest. He averaged just 3.3 points and 2.7 rebounds per game, but showed that he has the potential to shoot at a high percentage, finishing the season averaging 54.5% from the floor. Whitman delivered an excellent performance in the CAA quarterfinals last season, matching a career high 9-points against in-state rival James Madison. In the contest, he went 3-3 from the floor, hitting 3-of-4 from the free throw line, while also adding 5 rebounds. Whitman’s strong finish to the season has more than earned him a starting job this winter, but he’ll face stiff competition for playing time from Hunter Seacat, as well as freshman Nathan Knight.

#10 Connor Burchfield, Junior, Guard (6’4″, 177 lb): Another revelation last year was Connor Burchfield. Emerging as the go-to 3-point scorer on the team, he really has come along to become an every-game contributor for the Tribe. On multiple occasions last year when coming off the bench, he single-handedly brought back the momentum and lead to the Tribe through his incredible ability to score from beyond the arc. Don’t believe he has an amazing ability? Well, he actually led the entire country in 3-point field goal percentage (with the minimum # of 3-pointers made) at an incredible 56.3%. His 3-point percentage last year was the all-time best in W&M program history. Moreover, he scored in double figures in 7 contests last season, hitting 7-of-10 from the floor and 3-of-5 from 3-point range in last year’s CAA Tournament. Again, two words to describe Connor Burchfield: Game Changer. Look for him to again compete for the highest 3-point % in not only the CAA, but in all the land this season.

#21 Oliver Tot, Junior, Guard (6’6″, 205 lb): The slippery, sure-handed baller from Slovakia is back this year, now in his junior season. Coming off a year that saw him start the season on injury reserve, Tot would come back to appear in 26 total games in reserve as a point guard. Although his averages were low, and admittedly he had a down year in 2015, he still has one of the best handles on the team, and truly does see things that others can’t. On multiple occasions he’ll be dribbling down the court on a fast break, only to make an incredible no-look one-handed pass to a man driving to the basket for the 2-point basket. We look for Tot to bounce back this season and strongly contribute behind starter David Cohn.

#50 Hunter Seacat, Sophomore, Forward (6’9″, 235 lb): Seacat saw action in 19 games last year in his freshman season, averaging 8.7 minutes per game, 2.1 points, and 1.1 rebounds. It was an up and down season, that saw him flash brilliance (8 points on 4-5 shooting against Hofstra), and lows that caused him to barely see the court. If he can put it all together, he’s an athletic big man that knows what to do around the basket.

#13 Nathan Knight, Freshman, Forward (6’10”, 247 lb): One of the crown jewels from this year’s recruiting class, Tony Shaver may have performed a coup with this one. Knight, a 6’10” 247 pound behemoth hails from New York and joins the Tribe after turning down over 30 D-1 offers, including offers from JMU, Northeastern, George Mason, and Temple. Last season, he played a post-graduate year at Kimball Union in New Hampshire, earning third-team honors, while averaging 13 points, 10 rebounds, and 1.5 blocked shots per game. A raw talent, Knight will look to develop, and make an impact for the Tribe in the post this season.

#23 Justin Pierce, Freshman, Guard/Forward (6’6″, 205 lb): Another potential star freshman for the Tribe, Pierce reminds us a bit of Omar Prewitt. He’s quick, athletic, has a knack for getting to the basket, and is absolutely deadly from three. Shaver may have found a perfect player for W&M’s system here, and we look for Pierce to see the court early and often this year–perhaps even pushing for sixth man duties with Burchfield and Tot.

W&M starts the season against D-3 opponent Bridgewater before traveling to face perennial powerhouse Louisville, in their house. The Green and Gold will then come back home for a contest vs. Presbyterian before traveling to yet another powerhouse in Duke. Excitement is brewing and we can’t wait to get back to watching some Tribe Basketball. Don’t forget to tune into Tribe TV to catch W&M’s Home/Season Opener THIS SATURDAY! LET’S GO TRIBE!!!