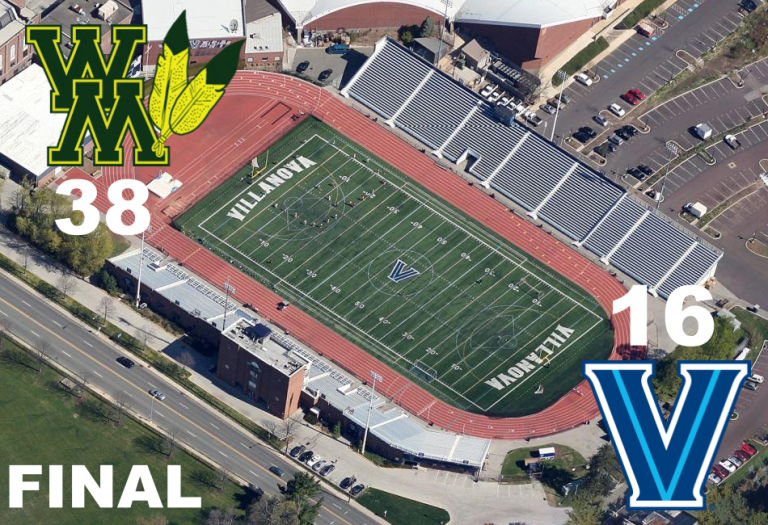 The Tribe got back in the win column this week after putting away the 14th ranked Villanova Wildcats. The win was big for William and Mary, especially after last week’s disappointing loss to Delaware. The Wildcats were without its injured Walter Payton award winner, John Robertson, and it showed in this one.

Game Summary: William and Mary got on the board first, converting a 23 yard field goal on its first drive. Villanova responded later in the first quarter with a 92 yard drive, topped off by a 3 yard touchdown run by Nova running back Gary Underwood. On the following drive, and for the second straight week, W&M’s Steve Cluley had the ball stripped and recovered by the opposing team. This put the Tribe defense in a tough spot, as Villanova took over deep in Tribe territory, leading 7-3. However, the Tribe defense would hold the Wildcats, resulting in a field goal. 10-3 Nova.

The Tribe would then go on a tear that left Villanova in the dust for the remainder of the game. It started with the offense, as William and Mary sustained drives of 79 and 71 yards, respectively. After a couple of nice throws by Cluley to get the Tribe in the red zone, Kendell Anderson capped off the first drive with a one yard touchdown run. After the Tribe defense held the Wildcats to a three and out, William and Mary got the ball back with the game tied 10-10.

On the first play of the drive, Kendell Anderson shredded tackles and went an insane 71 yards for the score. This gave the Tribe a 17-10 lead. Villanova responded by having a nice drive of their own, getting deep into Tribe territory. Then, the Tribe’s top NFL prospect DeAndre Houston-Carson took over, notching a highlight reel 94 yard interception return for a touchdown. It was the longest interception return in the history of William and Mary football. And we’ve been playing football a LONG time. He broke the currently held record of his running mate, strong safety Jared Velasquez, who had the record after a 90 yard touchdown return on homecoming against JMU back in 2013. After the pick six, the Tribe went up 24-10, and really didn’t look back.

The team went on to score another touchdown before the end of the half, when Cluley found senior receiver Christian Reeves on a 53 yard touchdown pass. William and Mary scored 31 points in the first half and took a commanding 31-10 lead into half.

The third quarter was pretty slow, with the Tribe trying to waste clock in the run game and the defense keeping Villanova in check. The third quarter ended with neither team scoring any points. The fourth quarter was different, as Kendell Anderson added his third touchdown of the game on a one yard run. Villanova added a rushing touchdown in garbage time, and the two-point conversion was no good. The Tribe eventually went into victory formation, and the game ended with a 38-16 Tribe victory.

The Good: Offensively, Kendell Anderson was a beast, again. In Anderson’s last three games, he has rushed for a combined 441 yards and 5 touchdowns, averaging 147 yards a game. That is insane numbers for a “back up” running back. Additionally, Mikal Abdul-Saboor returned to action Saturday, and looked good in the limited snaps he saw. We hope he will be fully healthy soon, as the Tribe will need both of its running backs as William and Mary begins what may become a season-defining three game home stand this week.

In addition to the running backs, QB Steve Cluley looked strong. He was 16/28 for 267 yards and 1 touchdown. He looked calm and poised in the pocket, and threw some great deep balls to the likes of Kevin Hart and Christian Reeves, including a 53 yard touchdown pass to the latter. Cluley now has 1115 yards passing with 8 touchdowns and 1 interception this year. This is the kind of year we need out of Cluley if the Tribe is to make it back to the promised land, as he continues to limit turnovers and make smart plays.

William and Mary’s defense gave up just 10 points before a garbage time TD by Villanova in the fourth quarter. The unit also finished with 2 sacks and 2 interceptions, holding  the Villanova offense to just a 1/12 conversion rate on third down. Add that to the fact that DeAndre Houston-Carson had a 94 yard interception return for a touchdown, and we think it is fair to say that the defense reestablished its “Green Swarm” identity. The unit also saw the return of senior linebacker Zach Fetters, who ended the game with a team high 8 tackles, and undoubtedly sparked a defense that was in need of a jolt after last week. His presence added strength to the unit, and it did not disappoint.

The Bad: Kicker Nick Dorka missed his second field goal of the season, this time a 32 yarder. After Dorka missed in the third quarter, head coach Jimmye Laycock avoided the kicking game the rest of the way. William and Mary went for it a couple of times on fourth down to avoid kicking a field goal in the fourth quarter. Other than that, both the Offense and Defense were firing on all cylinders, and punter Hunter Windmuller had 4 punts that traveled 200 yards in total, averaging an impressive 50 yards per punt in the process.

Injuries: Starting running back Mikal Abdul-Saboor returned to the game, and looked good. Senior linebacker Zach Fetters returned to action as well, and added 8 tackles. Ian Haislip remains sidelined after sustaining an injury in the UVA game a while back.

Around the CAA: JMU again posted an insane point total, Richmond beat Elon, Maine crushed Albany, and Delaware disappointed us all by getting destroyed by Rhode Island. Delaware’s putrid performance makes W&M’s loss to the Blue Hens look even worse, but there’s nothing we can do about it. Time to enter this three game home stand strong and come out with some Ws!

CAA Standings: JMU maintains its undefeated record and has a clear grasp on the CAA leaderboard. Richmond isn’t far behind with an impressive start to the season. W&M, along with Maine, sports a 2-1 CAA record–and very much remains in contention for the league crown. Delaware’s humiliating loss to Rhode Island pushes them further down the rankings, as their lone CAA win came against W&M last week. Look Ahead: William and Mary finally returns home after playing 4 of its first 5 games on the road. This three game stretch will be crucial for William and Mary if it has any hope of making the playoffs this year. Playing against UNH, Hampton, and JMU, William and Mary will have to win at least 2 of 3 to firmly keep its playoff hopes alive. Next week’s opponent is UNH, who look to be getting back their starting quarterback despite his being sidelined since week 1. UNH is always a powerful offense regardless of the quarterback that is in and the Tribe defense will have to play strong in this one.

Can the Tribe get back to back victories against ranked opponents? LET’S GO TRIBE!!!!