A few weeks after the initial announcement, Tribe Athletics has finally released pictures of the new and improved basketball court in Kaplan Arena! Leading up to its release, we at the W&M Sports Blog polled you, the fans, over the last couple days about which logo you would like to see at center court. After 200 votes were cast, it came down to two logos: a Green Tribe logo or the W&M Cypher. The Green Tribe logo narrowly beat out the W&M Cypher by a voter tally of 113-98.

It was a heated voting contest that still left us wondering which logo fans really want. The Cypher and Green Cursive Tribe logos were so closely voted for, that much more research and polling would have to be done before we came to a true conclusion. However, if you combine the Yellow, Gold, and Green votes all for the Cursive Tribe logo, the votes start to skew much more toward fans wanting some version of the Cursive Tribe to remain at center court. If that’s the case, then the new court design fits the bill. Check out the breakdown of the voting below. 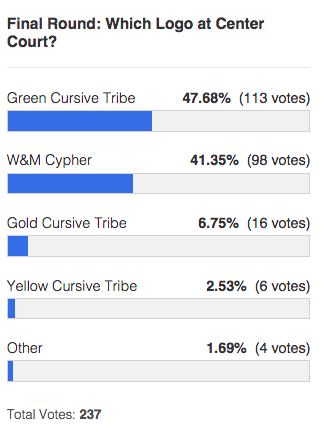 So in the end we got neither the Green Cursive Tribe nor the W&M Cypher, BUT the court sure does look pretty sweet. Even without the change at center court, the new and improved floor at Kaplan Arena is a welcome design change for a program that continues to produce success year in and year out under head coach Tony Shaver–plus the design brings a nice breath of fresh air for a William & Mary Hall that opened way back in 1971.

Wonder how it was all done? William & Mary Tribe Athletics’ Facebook page released an incredible time-lapse video detailing the project from start to finish. It’s interesting to see how much planning, work, and creativity goes into making a basketball court. We highly recommend you watch; as an extra bonus, it’ll get you even more pumped for the 2015 Tribe basketball season!

The new, darker wood on the court stands in stark contrast to the lighter wood used inside the three point line. If it has to be yellow, at least the Cursive Tribe logo at center court now stands out a lot better than its predecessor did– now against a much darker background. The shade of yellow is slightly darker, again much better than last year’s brighter yellow. The “Tribe” itself is also noticeably larger. The “CAA” logo at the foul lines have changed from yellow to green. We see all of these changes away from yellow as a positive, as the true colors of the school are now green and gold–not yellow. Next, let’s change the color of those seats! Perhaps as part of the 10-year plan.

Finally, to give you a good comparison of how the court looked before the makeover, check out the images below.

What will the new court design be at Kaplan Arena? Here is a look back at the court design from 2010 (bottom) and the most recent design (top). Check back to the Tribe Social Media accounts at 12:30 PM today for the design unveil. #RisingTribe

We at the Blog think this is an awesome new design for the Tribe, and a much deserved present for the basketball program! And let’s not forget the multitude of other W&M athletic teams that will benefit from the new design, such as women’s basketball, women’s volleyball, and others! Leave a comment below and let us know what you think of the new look. Here’s to another basketball season with hopes of finally making the NCAA TOURNAMENT! LET’S GO TRIBE!!!