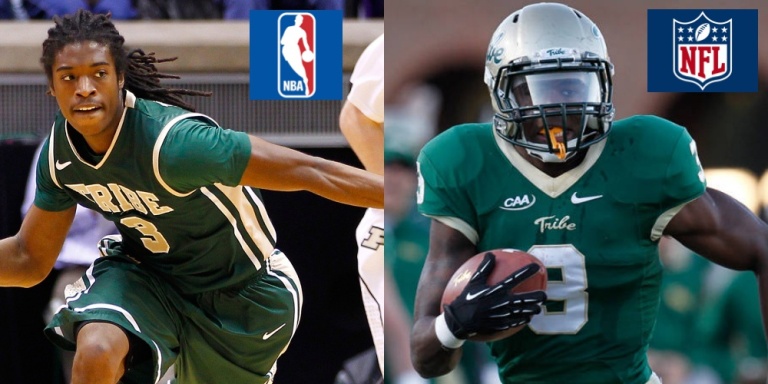 It’s been an exciting offseason for Tribe fans so far, with two of William & Mary’s most recent graduates pursuing professional sports aspirations. Marcus Thornton is busy proving himself worthy of the NBA, while Tre McBride is carving out a role with the Tennessee Titans in Nashville. It’s been a little while since we checked in on the two players, so let’s get to it!

Marcus Thornton was just recently invited to the NBA Draft Combine, which took place from May 12-17. He received the invitation after his stellar play at the Portsmouth Invitational Tournament, which according to Wiki: “is the United States’ oldest amateur basketball tournament and the only postseason camp conducted for the top NCAA seniors only.

The tournament is recognized by the National Basketball Association (NBA) as a showcase for future professional players. Approximately 200 NBA representatives attend the event with 64 seniors invited to play in one of the 8 teams (8×8 players). The four-day tournament consist of 12 games and has existed since 1953.

NBA players who are alumni of the Portsmouth Invitational include Scottie Pippen, Dennis Rodman, John Stockton, Tim Hardaway, Ben Wallace, Avery Johnson, Rick Barry, Dave Cowens, and Earl Monroe.” Marcus showed that he has potential to play at the next level at this tournament, and earned himself an NBA Combine invite.

At the Combine, Thornton had the fastest three-quarter court sprint at 3.02 seconds, and was tied for 12th in lane agility at 10.96 seconds. He tied for third in the standing vertical jump at 34.5 inches, and tied for second in max vertical jump at 43.0 inches.

Marcus Thornton had the fastest 3/4 court sprint at 3.02 seconds at the draft Combine. Rondae Hollis-Jefferson was second at 3.12 seconds.

This Combine performance earned Marcus  national attention and publicity. Fran Fraschilla of ESPN commented during the broadcast, “I like Marcus Thornton. I’ve watched a lot of tape of him. He’s the leading scorer in the history of William & Mary; that might not say much, but it shows you about his longevity. Really athletic, great bounce, gets his own shot, got to be a little better passer…but this kid could be a steal. And maybe a second round steal.”

Marcus was listed as a Combine winner by both Today’s Fastbreak and NBADraft.net. There are mixed views as to whether or not he will get drafted, but most believe he will receive multiple private workouts and have camp invites at the very least.

Thornton’s potential landing spots at this point range anywhere from: a selection in the 2nd round of the NBA draft, an NBA camp invite, or playing internationally. Whatever way you look at it, Marcus’ basketball career is far from over. We are excited to see what the future holds for him down the road.

As we detailed in an earlier post, Tre McBride was drafted by the Tennessee Titans in the 7th round of the NFL draft, 245th overall. While McBride certainly fell farther than we expected him to, he now seems to be making the most out of his situation. McBride’s draft-day fall has simply become added motivation for Tre in making the Titans’ roster. His positive outlook has been apparent; evident on Instagram is the rapport he already has with fellow Titans rookie wide receiver, Dorial Green-Beckham. [Tre #16 on the left, and DGB #17 on the right]

Right now, Tre is immersed in the Titans’ Rookie Mini Camp–so much so, that he remained in Tennessee during W&M’s graduation weekend. But don’t worry, his family was there to take his place and receive his diploma in Williamsburg! At Rookie Mini Camp, Tre is busy learning NFL playing schemes, meeting coaches and team administrators for the first time, and becoming wholly acclimated with the Titans playbook. The drills he is participating in are non-contact drills in which players mainly wear t-shirts and jerseys (with no pads). This is the time for Tre to begin making a name for himself.

McBride’s next step will be Organized Team Activities (OTAs), which begin May 26th, followed by Mandatory Minicamp in the middle of June. We will continue to monitor McBride’s progression in Tennessee.

Be sure to check back with us for updates on both Marcus Thornton and Tre McBride in the near future! LET’S GO TRIBE!!!