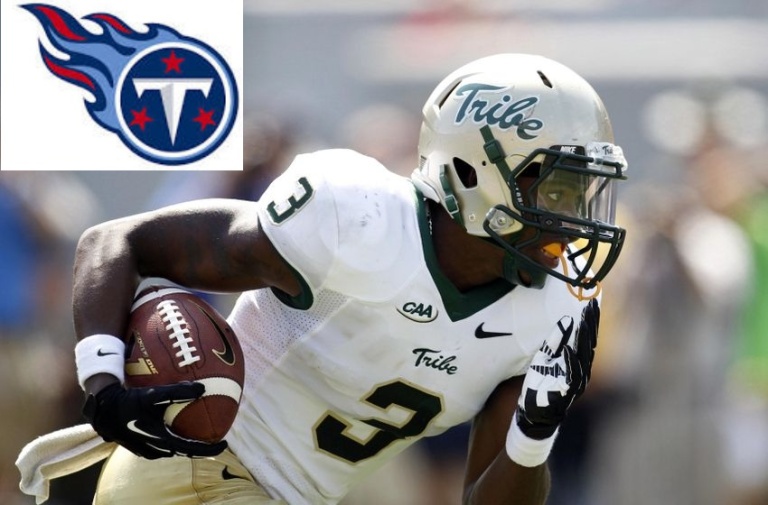 IT IS OFFICIAL! Tre McBride has officially been DRAFTED by the Tennessee Titans. CONGRATULATIONS TRE!!!

Below is the Step-By-Step path that Tre has taken since the end of his Senior season in preparation for life in the NFL. Included are Tweets, videos, Instagram posts, and articles– all detailing Tre and the various activities he has taken part in since the season’s end. Enjoy!

Tre McBride’s Path to the Draft
2011-2015: Senior Year & Career at William and Mary
Tre finished his Senior year with 64 receptions for 809 yards and 4 touchdowns, earning him a first team all-CAA selection for the second straight year. He also set a school record with 359 all purpose yards against Villanova.

Throughout his incredible career in Williamsburg, Tre was a three time All-CAA selection and a CAA Special Teams Player of the Year. He finished 2nd in all-time receptions at W&M (with 196), 5th in receiving yards (2,653 yds), 5th in all-purpose yards (4,281 yds), and 6th in touchdown catches (19). McBride finished his career as one of the greatest, if not the greatest, receiver in W&M program history.

Tre tore up the competition throughout the week of practices leading up to the big game, and began to turn a lot of heads. In the game itself, McBride finished with 2 receptions for 23 yards. He was targeted several times throughout the contest, and flashed not only his route-running ability, but also his blazing fast speed, and separation ability.

If not for a couple poorly thrown balls from out of sync quarterbacks, Tre may have had a touchdown and led the game in receiving yards. He burned a corner on a nicely run hitch and go route, but the quarterback was unable to connect with him down the field. The defensive back made a nice recovery and knocked the slightly under thrown ball away.

Any way you look at it, McBride’s performance in the Shrine Game and the week of practice heading up to it was head and shoulders above just about every other receiver. Most notably, McBride performed at an extremely high level in one-on-one drills, as he consistently got open using his speed and route-running ability to create separation. All this left NFL Scouts salivating for more.

February 21: NFL Combine: Tre worked incredibly hard coming into the Combine, and it showed. He ran an insanely fast 4.41 40 time, good for 6th best among ALL wide receivers. He also put up 16 reps of 225 pounds on the bench press and had a 38 inch vertical jump, both good for top 10 finishes in the combine at his position.

As Mike Mayock states in the video below, “This kid is building a resume. Checking off all the boxes and moving up in draft stock.”

Check out video of all of Tre’s workouts here, along with commentary on his 40 time from respected NFL analyst Mike Mayock.

To put the 4.41 time into perspective, Alabama’s top wide receiver and the first WR taken in this year’s draft, Amari Cooper, ran an unofficial 4.42 forty yard dash and the University of Maryland’s speedster, Stefon Diggs, ran an unofficial 4.46 forty yard dash–both checking in just a tad slower than McBride. And as an interesting side note for all you Redskins fans out there, Tre McBride’s 40 time is the exact same as Robert Griffin III’s at 4.41.

Tre McBride went to the College of William & Mary.

February 22: WM Sports Blog Poll: Back in February, we received 692 votes in a poll asking, “Which Round Will McBride be Drafted In?” An overwhelming majority of you believed that Tre would be drafted in the 3rd-4th round. 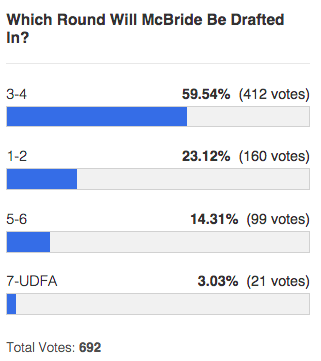 March 19: William & Mary Pro Day: A staggering 18 NFL scouts made the trip to Williamsburg for the Tribe’s Pro Day. Most were there to get another look at Tre since seeing him in both the Shrine Game and the NFL Combine. He didn’t disappoint. McBride improved on his combine numbers and ran an even better 4.39 40 time (down .02 from the Combine) and had a 38 inch vertical leap.

March 19 – April 19: NFL Team Visits: With the draft one month away, Tre flew out and visited teams who wanted to see him in person, run some drills with him on their home turf, and take a final look at the receiver before the Draft on May 30th.

McBride held private work outs with teams such as the Patriots, Bills, Lions, Broncos, and others. Leading up to the draft, CBS Sports graded Tre as a 3rd round draft pick, up from the 5th round projection they had on him before his NFL Combine performance–showing just how far McBride has shot up NFL draft boards in recent weeks.

NFL scouts and media pundits compared McBride to the New England Patriots’ Brandon LaFell and to the Washington Redskins’ Pierre Garçon leading up to the draft.

April 30 – May 2: NFL Draft: Incredibly surprisingly, McBride did not hear his name called in the 2015 NFL Draft until the 7th round, as the 245th pick! As Tre had a 3rd-4th round grade heading into the weekend, we can only guess that teams were having a hard time projecting Tre at the next level–given the fact that he has mostly played against FCS talent throughout his college career.

Tre McBride has fallen so far in this draft, I am mind blown. There are so many good players that have dropped. Zach Hodges is another one

Either way, we think that the drop was completely unwarranted. ESPN’s Mel Kiper Jr. expressed his opinion on Tre’s drop toward the end of the 5th round and stated, “I know [William & Mary] is a 1-AA program, but it produces NFL players…I thought he would go in the 4th round…McBride should come off the board [soon].” Even still, Tre kept his spirits up during the draft, as he tweeted the following:

I'm ok with whatever happens. I know I will make a roster one way or the other.

So FINALLY after much waiting, McBride was finally DRAFTED by the TENNESSEE TITANS! Tre will have a good shot on a team that has a relatively thin receiving corps. Titans WRs currently include the likes of Nate Washington, Kendall Wright, Derek Hagan, and this year’s second round pick Dorial Green-Beckham. McBride will also join fellow rookie and #2 overall pick Marcus Mariota, who was this season’s Heisman trophy winner.

Again, we want to offer a huge CONGRATULATIONS to Tre McBride on being drafted by the Titans! We look forward to following Tre’s progress throughout his career, and wish him the best of luck in Tennessee. It’s always awesome to see a fellow member of the Tribe excel at the highest level–regardless the profession. LET’S GO TRIBE!!!