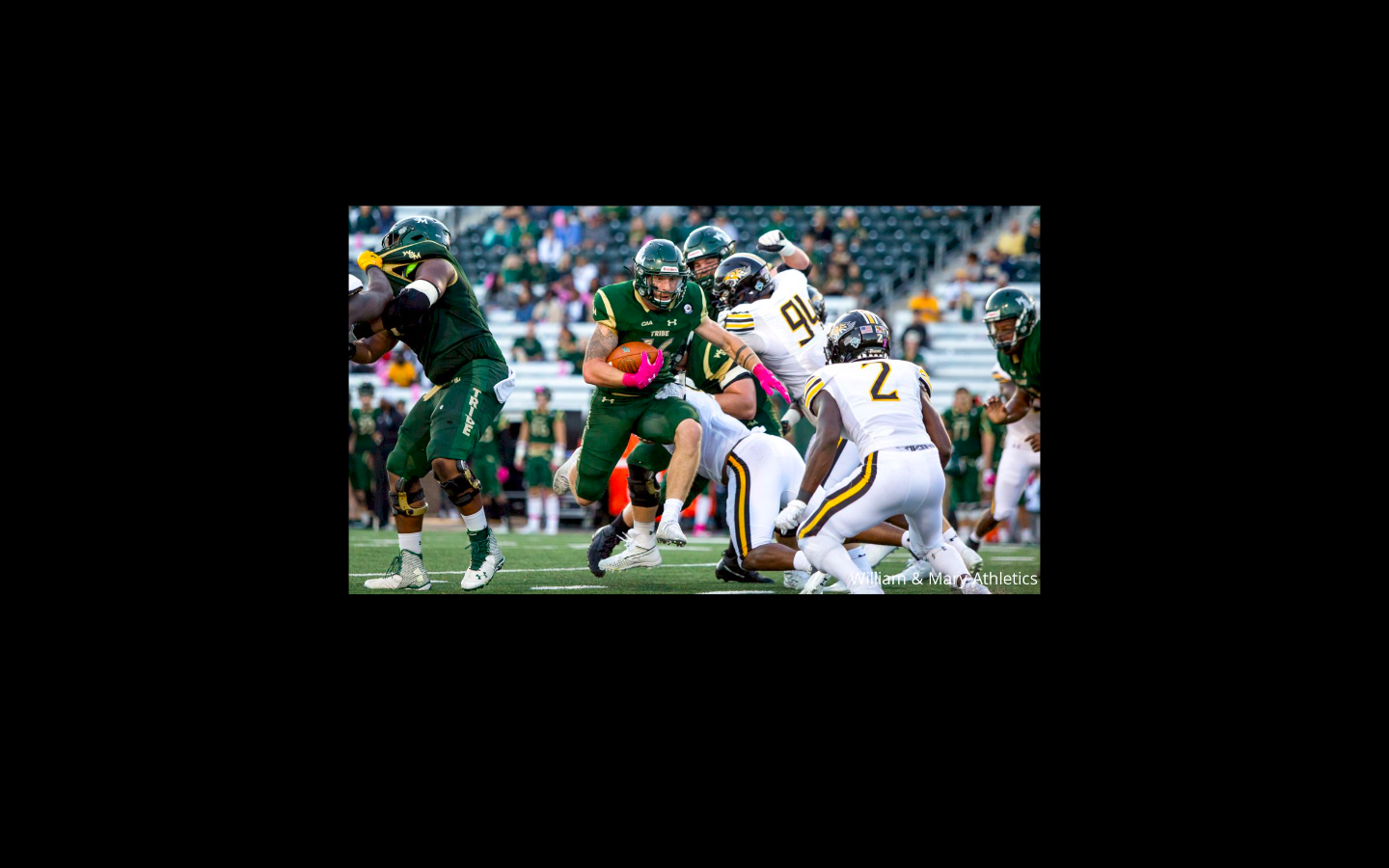 In a much-anticipated Homecoming matchup, the 16th ranked William and Mary Tribe (4-1) play host to 6th ranked Delaware Blue Hens (5-0) this weekend at Zable Stadium. And “much-anticipated”, though rarely applied to a Tribe football team that has spent the better half of the last decade mired in fruitless mediocrity, is certainly the only way to describe this showdown between Mike London’s ascendant W&M program and their undefeated CAA rival, Delaware.

The matchup promises to pit an efficient, dynamic Tribe offense led by the three headed rushing attack of RB Bronson Yoder (#9), RB Malachi Imoh (#1) and QB Darius Wilson (#11), against the stifling Blue Hens defensive unit that has catapulted the program to the top of the CAA standings (and near the top of the FCS rankings).

The two football programs have a long history, with 42 subsequent matchups since their first more than a century ago. Having taken both of the previous two meetings (2017 and 2021) by a combined score of 41 – 3, and remaining unbeaten in the 2022 campaign, Delaware seeks to maintain its momentum, while the Tribe come into the weekend as underdogs in search of a statement win in their first serious test since their heartbreaking 4th Quarter collapse at home to fellow CAA rival and FCS playoff aspirant, Elon.

John Pius: For those of us who have watched any Tribe football this year, this standout Sophomore Edge rusher needs no introduction and his selection requires little explanation. His 7.5 sacks and 13 tackles for a loss rank in the top two in the FCS in each statistical category among all defensive players. For opposing offensive coordinators, his elite quickness and nose for the quarterback have been, at best, a major headache, and at worst, a complete game wrecker. Entering the week as one of the league’s most statistically dominant pass rushers, Pius has an enticing matchup against a mediocre Delaware Offensive Line that has struggled repeatedly this season to keep its QB upright.

Nate Lynn: Doubling up on members of the Tribe defensive front 7, Lynn, the imposing Junior anchor of the W&M defensive front, could also benefit from the shaky Delaware offensive line. The early season success of LB John Pius as a pass rusher may force the Blue Hens to shift their attention away from Lynn on important passing downs, a change which could provide him with the kind of one on one matchups on which he thrives.

Malachi Imoh: Another name which won’t come as a shock to most Tribe fans, the diminutive sophomore running back proved last week that he is every inch as explosive in large doses as he is in small ones and that he certainly deserves an even larger role. His impressive combination of speed, short area quickness and exceptional vision led him to his best performance of the young campaign (21 carries for 128 yards and 3 TDs) and led the Tribe to victory against Stony Brook. Among all FCS running backs (145), Imoh ranks 8th in rushing efficiency, registering an inspired 7.65 yards across his four healthy games, making him one of the league’s most electric ball carriers. His 7 TDs also make him the only back to account for 7 or more touchdowns on fewer than 50 carries (which he accomplished in only 40 carries). It suffices to say Imoh’s dynamic skill set makes for appointment viewing for Tribe fans.

Key Matchups:
With this matchup being one of two top 20 FCS defensive units, it seems more likely to be a defensively slugfest than a shootout. It should be no surprise that the majority of Tribe matchups to watch come on the defensive and special teams’ sides of the ball.

A Tribe defensive front that ranks in the FCS top 15 in sacks (3.2 sacks per game) will have a tantalizing opportunity Saturday against a Delaware offensive line that, despite gradual improvements, still ranks in the bottom half of the FCS in sacks allowed (2.6 sacks allowed per game). This matchup could take on paramount importance in the contest given the pass heavy nature of the Delaware offense and the impact that pressure in the pocket has had on Blue Hens star signal caller Nolan Henderson.

While I’m certainly not breaking any new ground by suggesting that continually reacquainting a quarterback with the turf will have an impact on his performance, Henderson’s substantial statistical success from clean pockets has shone a light on his particular struggles when dealing with pressure. His impressive passer efficiency rating when sacked 2 or fewer times (175.6) is nearly 44 points above his more pedestrian rating (131.7) when sacked 3 or more times in a game. Henderson’s utterly unimpressive rushing numbers, 41 yards on 45 attempts which amount to a miserable 0.91 yards per rush, show his inability to hurt the defense with his legs, highlighting the importance of the matchup between the W&M front and the Delaware Offensive Line.

W&M Secondary vs Delaware Passing Attack
Contrary to the Defensive front, the Tribe Secondary is in for a tougher challenge against a Delaware passing offense rated 9th in the FCS in passing yards per game (293.8). Blue Hens QB Nolan Henderson ranks 13th among the 118 FCS QBs in passing efficiency (157.09) and has completed an impressive 67.2% of his passes while tossing 16 TDs and 4 INTs. However, there are also significant reasons for optimism for Tribe fans. Foremost among those is that the W&M pass defense is itself extremely competitive, ranked 18th out of 123 teams in the FCS. This is particularly noteworthy given that only one of Delaware’s four wins came against FCS opponents who currently rank better than 50th in passing defense (with their single FBS opponent, Navy, ranking 126th among 131 FBS teams in the category).

Against the only pass defense in the FCS top 50, Del Senior QB Nolan Henderson had his worst outing of the campaign, posting a passer efficiency rating 27 point lower than his year average and tossing two picks while completing only 58% of his passes (67% on the season). This seems consistent with the fact that while the gross figures show a top FCS passing offense, efficiency measures such as yards per attempt and yards per completion reveal one which is closer to the middle of the pack than its head and lacks a truly explosive player maker at the skill positions.

W&M Rushing Attack vs Delaware Defense
Another crucial matchup is the contest between the engine of the Tribe offense, its running game, and one of the nation’s premier FCS defenses. This vaunted Blue Hens defense ranks in the top 5 FCS units in the nation in most major categories, including Scoring Defense, Passing Defense, Red Zone Defense, and 3rd Down Defense. They are a tough, talented group who always seem to play their best in the crucial situations (3rd in FCS in RZ and 3rd Down Defense).

However, while they have suffocated teams through the air, with Delaware putting teams in early deficits and forcing them to turn to predictable pass heavy approaches that play into the hands of a top FCS secondary, the Delaware Defense has had markedly less success stopping the run, ranking outside of the FCS top 30 in this area (40th ). This chink in the armor of the Blue Hens is perfectly suited to the run heavy approach W&M want to employ offensively with roughly 60% of their first downs and 77% of their TDs coming on the ground. Regardless of who is healthy and suited up on Saturday for the Tribe, their deep, dynamic running back group should remain the focal point of the offense come Saturday if they are to win this key contest in front of the home fans.

WM Punt Return Unit vs Delaware’s Punt Coverage Team
Among all the possible points of interest in an FCS football game, I admit I have quite possibly erred in drawing the reader’s attention to potentially the least interesting element of the sport, punting. However, among the key points to emerge from the stunning W&M loss to Elon was the struggles of the Punt return team in the 2nd half which left the W&M pinned deep in their own half with negligible space to operate, a handicap they proved unable to overcome.

These difficulties are painted in stark contrast to one of the most effective groups in the FCS, Delaware’s Punt Coverage Team. Ranked 3 rd among all FCS teams in Net Punting yards, this unit has played excellent complementary football with the strong Blue Hens defense by routinely pinning opposing offenses back deep, having not one touchback given away in 19 punts through five games. In order to allow their offense room to breathe early in this matchup, it is essential that the Tribe return team redeem themselves this week.

Conclusion:
Between the century old rivalry, the recently rekindled hopes potential FCS playoff implications, and the spirit and excitement of homecoming weekend, this matchup is truly what College football is all about. With the stage set, it only remains for all us Tribe fans to sit back and enjoy the show.