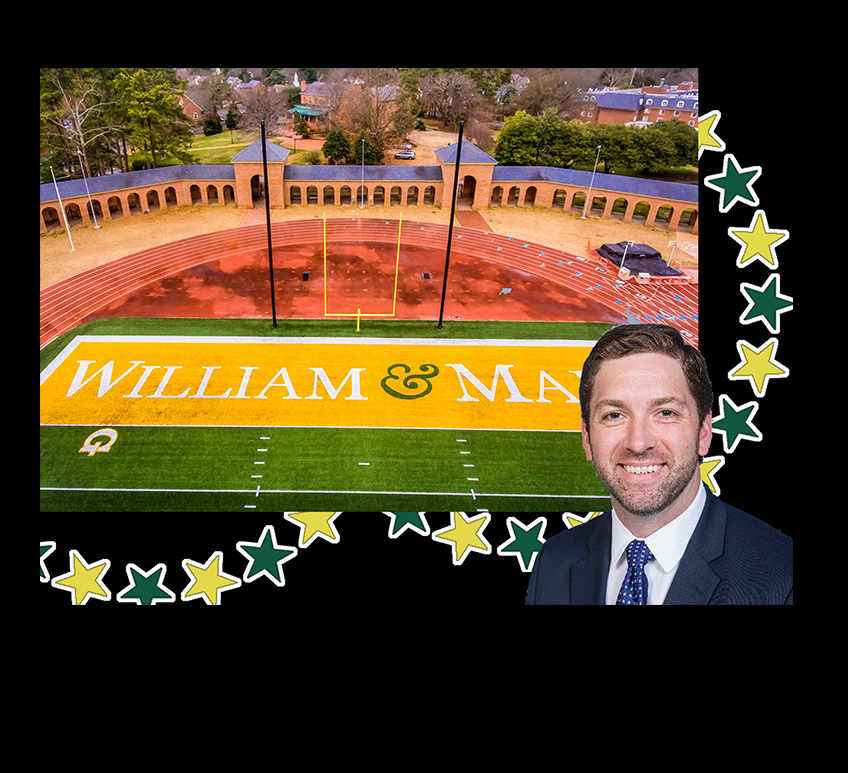 It’s FINALLY HAPPENED! W&M has hired its next Athletics Director, Brian Mann. Brian is a graduate of Dartmouth, who has had experience in the “front offices” of several prominent schools, including Rice, UC Berkeley, and the aforementioned Dartmouth.

We’re incredibly excited to hear the news, and want to fill our readers in on some quick hits regarding Mann’s background. Ladies and gentlemen, meet your new AD!

“Brian Mann [served] as the Chief Development Officer for Cal Athletics and leads all development and alumni relations efforts on behalf of the department.

In his first full year with the Bears, Mann spearheaded an effort to raise $36 million to support student-athletes.

He came to Cal after serving as the Chief Development Officer for the Rice University Athletics Department In Houston, Texas. Prior to that role, he held several positions at Dartmouth College, his alma mater.

Mann played quarterback at Dartmouth and graduated in 2002. Following graduation, he played for the LA Avengers of the Arena Football League for four years. He later earned a master’s degree while working at Dartmouth in the athletics department.”

But it is perhaps W&M’s official press release that has us most excited, which included the following items we found most interesting at first glance:

“Mann holds bachelor’s and master’s degrees from Dartmouth, where he played quarterback. His 5,912 career passing yards are third on the Big Green’s all-time list.”

WMSB instant reaction: A true-blood scholar athlete at an Ivy League school — we love this.

“Mann was the architect for the [Berkeley] athletics department’s $350 million portion of the university’s $6 billion campaign… He had sport oversight of the men’s basketball team and was a key contributor to the department’s ongoing strategic plan.”

WMSB instant reaction: Not only is he coming in with 18 years of intercollegiate athletics experience, but he’s also coming from an internationally-known academic powerhouse. The gravy on top? He’s personally overseen the basketball team — a key cog in many W&M fans’ proposed strategy for W&M Athletics moving forward.

“Prior to his stint at UC Berkeley, Mann was chief development officer and senior associate athletics director at Rice, where he was responsible for all fundraising for the Owls’ athletics programs.”

WMSB instant reaction: Not only does Mann boast college athletics experience at UC Berkeley (the nation’s top-ranked public university), but he also boasts experience at another academic powerhouse in Rice. While Rice is private, their profile is similar to W&M. Mann’s experience with the Owls makes him that much better for the Tribe.

“Mann got his start in athletics at Dartmouth College, his alma mater, where he served as director of football operations and began his work in fundraising. Mann holds bachelor’s and master’s degrees from Dartmouth”

WMSB instant reaction: Yet again, we find Mann with experience at another prestigious academic school; this time in the Ivy League, no less. Seeing a little bit of W&M in all three schools where Mann has experience (Berkeley, Rice, and Dartmouth), it’s no wonder Mann excelled in interviews with members of the hiring committee.

What we’ll look for during tomorrow’s introductory press conference are answers to some of the W&M Athletics’ community’s most pressing questions, including but not limited to:

At first glance, we LOVE the hire and look forward to seeing Mann tomorrow in the ‘Burg.

Brian — WELCOME TO THE TRIBE!