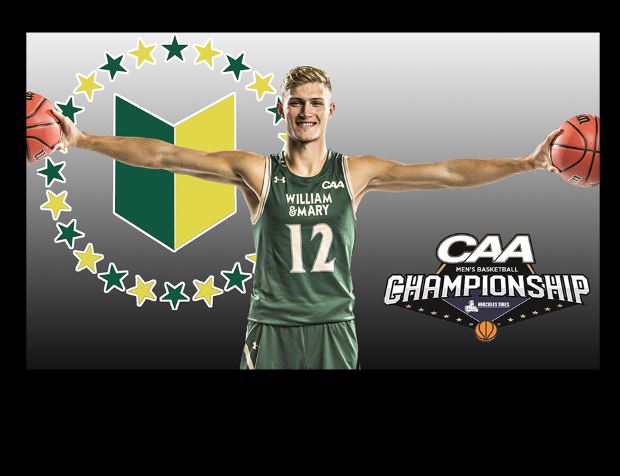 #MarchOnTribe #1Bid4WMTribe … am I missing any others? After a COVID-filled season, your William & Mary Tribe is finally ready for tournament play, beginning with a tilt against the UNCW Seahawks this Saturday.

Interestingly enough, W&M football also kicks off the exact same day at 1 PM (men’s basketball plays at 7 PM), which will provide Tribe fans with an experience they’ve never before had: a CAA Tournament basketball game coupled with a W&M football game on the same exact day.

It was a season of twists and turns for men’s basketball, as a whopping 13 W&M games were outright cancelled due to COVID-19 outbreaks and protocol.

To put that number in perspective, the Tribe typically plays over 30 games per season; in short, this means that W&M saw nearly half its normal slate go up in dust.

As a result, W&M’s Saturday CAA Tournament match-up comes against a team that the Tribe did not get a chance to play this season (of course, due to COVID).

In a recent Zoom call with W&M faithful, head coach Dane Fischer said the team is working in “unprecedented” times — having never experienced a conference tournament game against an opponent his team did not face in the regular season.

Ah, COVID-19: the gift that keeps on giving. Ain’t it grand? This naturally raises the question…what happens if a team, say UNCW or W&M, has a COVID-19 outbreak between now and Saturday?

Great question. So the answer is that the team that has the outbreak will immediately drop out of the CAA Tournament; the rest of the seeds would not change, but the opponent of the team that drops out would automatically move forward in the bracket.

So, just how does the CAA Tournament bracket set up this season?

It’s interesting to compare the final CAA Tournament bracket to the preseason’s predicted order of finish. The annual ritual almost always serves as our reminder that preseason rankings mean absolutely nothing.

For example, the CAA’s regular season champion James Madison Dukes were picked to finish NINTH in the league this preseason. Yes, of 10 total teams. The preseason #1 Hofstra Pride? Well, they finished #4.

And, of course, your W&M Tribe finished three spots ahead of its meager preseason rank — which was more in line with our own preseason expectations (we expected W&M to finish approximately middle-of-the-pack).

But that’s all in the past. What matters is the here and now, and the simple fact remains: the Tribe has yet another chance to make history. Yes, that means qualifying for the NCAA Tournament for the first time in program history.

And yes, the Green and Gold represent a long-shot this season, but a chance is a chance nonetheless. And you never know, especially with COVID serving as an ever-growing, constant threat, any team can advance (by default) on any given night.

As mentioned, W&M did not get a chance to play UNCW this season; in fact, due to COVID-19, UNCW played the least amount of CAA games this season — competing in just 7 league contests (finishing 1-6).

But don’t let that fool you, UNCW has what it takes to knock out #7 W&M this Saturday, especially given the fact that the Seahawks have played more recently than W&M: dropping a close 80-77 contest to Elon on February 27 (last weekend).

In contrast, W&M last played an actual game on February 20th, against the same opponent: Elon. Tribe fans will remember that W&M dropped two straight contests to Elon by about 20 points each.

So while it’s not a perfect comparison, that same Elon team nearly lost to UNCW just five days later. Again, anything is possible — and that simple fact rings true this season more so than ever before.

So what else do we know about UNCW? As noted, the Seahawks were picked to finish #8 in the CAA in preseason polls; and while that of course doesn’t tell us much, the relative distance in that poll between W&M (#10) & UNCW (#8) suggests that the “experts” believe the two teams are working with similar talent levels.

So what is other data (at least, what little there is for UNCW) telling us about W&M’s opponent this Saturday? UNCW ranks #2 in the CAA in scoring offense, averaging 77.3 points per game. In fact, the Seahawks only trail #1-ranked JMU (78.5) in scoring.

Defensively, UNCW doesn’t rank nearly as well — checking in at #9 (2nd last) in the CAA, giving up an average of 73.8 points per game.

In fact, W&M’s coaching staff went as far as to say this group of guards is about as good as it gets in the CAA.

Backing that up is the fact that both Gadsen and Okauru rank within the top-15 in the CAA in scoring per game.

When #30 is on the floor, Tribe fans will know. It really is fair to wonder just how good this UNCW team could have been this year without COVID-19 throwing the season into complete disarray. I suppose we’ll never know.

So how does W&M come out with the victory on Saturday? As mentioned, the Tribe is a team that essentially ranks middle-of-the-pack in most significant statistical categories, but what W&M does consistently is run through its senior star Luke Loewe. And on both sides of the court.

Loewe ranks #1 in the entire CAA in assists / turnover ratio, with 48 assists to just 22 turnovers. And it’s fair to say that Coach Fischer more than trusts Loewe with the ball in his hands, as Loewe ranks #4 in the CAA in minutes played per game.

Without much experienced depth behind him (and really as the only senior on the team who gets playing time), Loewe must catch fire in each tournament game for this team to have a shot. And we mean that in terms of scoring, offensive distribution and flow, and lock-down defense.

Behind Loewe, who ranks #7 in the CAA in scoring (16 per game), is freshman phenom Connor Kochera; this season, the freshman averaged 13.9 points, good enough to rank #15 in the entire league.

Loewe can’t do it alone in the scoring column, and Kochera will be the one to contribute in that category, along with junior Quinn Blair, who averaged a healthy 11.6 points per game this season. Expect those three to step up this weekend.

Defensively, the Tribe’s #1 goal will be to slow down UNCW’s guards. Insert: Mehkel Harvey.

The 6’9″ 225 pound Harvey led the CAA in average blocks per game (2.3); any time UNCW’s guards find themselves driving in and around the basket, Harvey will need to be there. We expect UNCW to be there early and often, so for the Tribe, keeping Harvey in the game (without fouling out) will be paramount for W&M’s defensive efforts on Saturday.

A potential X-factor stat in this game is W&M’s ability to convert at the free throw line. Specifically, the Green and Gold rank #3 in the CAA in free throw percentage (.743).

And while UNCW is a great offensive team, they’re not so great defensively (at least based on the small sample size), giving up the second-most points in the CAA. If W&M can drive to the paint, drawing fouls and potential and-1 opportunities, the point differential at the charity stripe might just be enough propel the Tribe to victory.

It’ll be a different type of CAA Tournament, one without tickets open to the public; another interesting note is that the games will take place at JMU’s brand new arena, in good ole Harrisonburg, Virginia.

Will it be tougher than many think? Very likely so. But does W&M have a chance? Absolutely, and that’s all we can ask for in March.

Discuss this topic with us on social media!