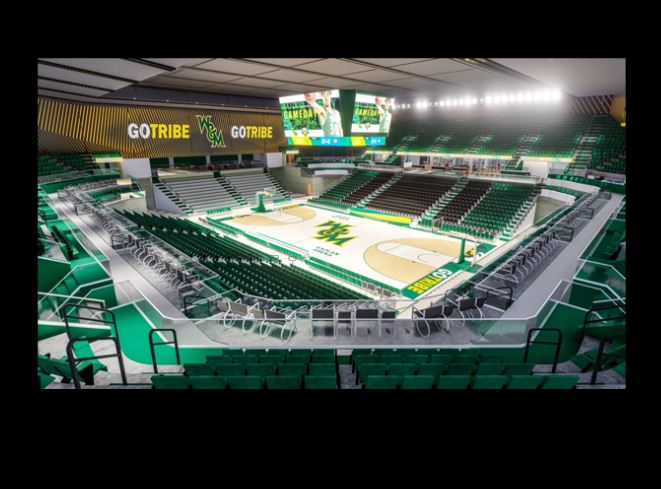 With the recent coming and going of former AD Samantha Huge, many in the community have described what they’d like to see in the next William & Mary Athletics Director.

For many, someone with direct ties to W&M seems to be the Green and Gold standard.

After all, an alum of the College would have the advantage of intrinsically understanding what it means to be part of the Tribe, having lived it.

But that criterion shouldn’t become the “be-all-end-all;” there are many qualified candidates that can thrive within the university’s long-established culture.

The below is a non-comprehensive look at some names to consider when the time comes.

And if the recent past has taught us nothing, administration will need to think long and hard before tying the knot with anyone new.

An alum of the College who is revered throughout Williamsburg and beyond, if you cut Albert open, you’re destined to see him bleed Green and Gold.

Albert has been a staple in the William & Mary community for decades; there is perhaps no one on Earth who represents W&M Athletics better than Al.

Eventually focusing his time as the head coach of W&M soccer, Albert amassed an astounding 401–187–64 record.

Stepping down after 33 years, which included a run of 29 consecutive winning seasons and several conference championships, Albert retired his post in 2003.

Currently, Albert is the Associate Director of Development at William & Mary, where he has run the Tribe Club since January 2004.

The only knock on Albert would be his age — already 71, W&M couldn’t expect Al to #1 immediately take the job and #2 be in it for an extended period of time.

But if the College is looking for someone to right the ship and lead W&M for a handful of years, Albert could be the guy for the job.

Another former W&M student-athlete (’98) who played football for the Tribe, Brian Shallcross largely spent his time in the ‘Burg under the tutelage of Jimmye Laycock.

In fact, Brian is a member of the Tribe Football Walk-On Hall of Fame.

Following an incredibly successful career as W&M’s top kicker, Shallcross graduated with a BBA in Marketing from the College.

Immediately following graduation, and looking to continue on in the sports world, he enrolled in Ohio University’s renowned Sports Administration program — ultimately graduating in 1999.

From there, it’s been a long, illustrious career in the world of sports business — as Shallcross’ resume includes two quick, early stops: one at UVA selling luxury suites and one in event services at Comcast Spectacor, the owner of the Flyers and Wells Fargo Center in Philadelphia.

After those two stints, Shallcross entered the world of Minor League Baseball. And he’s never looked back.

Since 2004, he has been with the Bowie Baysox, the AA affiliate of the Baltimore Orioles; there, he holds the high-ranking title of General Manager.

Currently in his mid-40s, Brian now has two decades of professional experience in the world of sports business. He also holds a master’s degree in the field, and is a former W&M student-athlete.

While there would certainly be an initial learning curve for someone like Shallcross as W&M’s AD, transitions such as these do happen for many in the sports industry (e.g. Kevin Warren’s recent career move from the Minnesota Vikings COO to current Big 10 Commissioner).

And while we don’t have any inside knowledge as to Shallcross’ desire to hold the role as W&M Athletics Director, we’ve seen his name mentioned by alums on social media as someone to consider.

Our former boss at W&M when we (Kyle & Davey of the WMSB) were young W&M Athletics marketing interns, Milne tops our personal list as someone who would be a great hire for the Green and Gold.

Below is an updated version of Penn State’s official press release, published when the Nittany Lions hired Milne away from W&M in 2017:

In the role, his responsibilities include ensuring lifelong, annual support from Penn State alumni, parents, and fans while maximizing their philanthropy in support of Nittany Lion student-athletes.

These duties include oversight of the Nittany Lion Club (which secures annual support from more than 22,000 donors each year), and is one of the largest organizations of its kind in the nation.

Milne joined the Nittany Lions’ staff after serving in external roles at the College of William & Mary for 11 years, most recently as Assistant Athletic Director for Marketing, Promotions and Ticket Services.

For four years (2013-2017), Milne was the Assistant Athletic Director for Marketing, Promotions and Ticket Services at William & Mary.

From Haymarket, Va., Milne joined the William & Mary staff in 2006 as Director of Ticket Operations and was promoted to Director of Marketing, Promotions and Ticket Services in 2010.

Prior to his tenure at William & Mary, Milne served in ticket operations at Florida Atlantic University and Wake Forest University.

His first ticketing position came while he was a graduate student at Ohio University, serving as the Interim Director of Ticket Operations in 2003-04 while working on his master’s degree in sport administration (the same program as Brian Shallcross mentioned above).

He graduated with a bachelor’s degree in sport industry, with a minor in business administration.

In our eyes, Milne would be a great hire; having served in W&M Athletics for over a decade — prior to Samantha Huge’s hiring — Milne embodies the true meaning of One Tribe One Family.

Anyone who has met him would tell you the same — go ahead and ask. He understands the school’s values, emphasis on academics, and focus on recruiting true student-athletes.

A potential Milne hire would be one that we at the WMSB could fully get behind.

Hired in July 2019, Henderson has been with the Tribe for over a year; currently, he is W&M’s Senior Associate Athletics Director/Executive Director of Athletics Advancement.

As someone with extensive experience in the collegiate sports space, Henderson truly has the profile of a future Athletics Director.

Below is an updated version of W&M’s official press release from his hiring:

“Henderson serves as the lead fundraiser for William & Mary Athletics, responsible for leading philanthropic strategies that advance the department’s pursuit of excellence.

A member of the senior leadership team, Henderson has oversight of all fundraising endeavors with the goal of assisting the Department of Athletics to advance its mission and ensure financial stability.

To that end, he oversees the Tribe Club Board and provides recommendations to the director of athletics and associate vice president for development on matters related to advancement activities and strategies that will enable the department to secure gifts at all levels.

He also supervises the athletics advancement staff and serves as a sport administrator.

Henderson came to Williamsburg with 15 years of experience in athletics revenue generation, serving the previous seven years at the University of Akron.

In that role, Henderson was responsible for day-to-day operations of the Z-Fund, the fundraising arm of Akron Athletics and for each of its 20 sports, including fundraising for capital projects, scholarships and major gifts as well as the oversight of premium seating, hospitality areas and events.

In more than seven years, the development team raised over $25 million and produced significant increases in fundraising for scholarships, a university priority, as well as increases in restricted dollars to individual sport programs.

Prior to joining the Zips, Henderson spent three years at Old Dominion, where he was the assistant director of athletic development.

He managed donor relationships for the Old Dominion Athletic Foundation and helped grow the athletic endowment to more than $16 million and the annual fund from $400,000 to $2.7 million annually through premium seat sales, annual contributions and naming rights opportunities.

Henderson transitioned to ODU from the private sector where he worked as the senior account executive at The Event Authority, LLC in Charlotte, North Carolina, responsible for managing the Jordan Brand Classic account.

Preceding his employment with The Event Authority, Henderson served as the director of marketing and corporate partnerships for the Mid-Eastern Athletic Conference (MEAC) in Virginia Beach.

In this role, he was responsible for prospecting, researching and establishing leads to corporate relationships as well as overall marketing of the conference events.

Henderson has also worked for Disney Sports Attractions, the Richmond Braves baseball club and as a substitute teacher and assistant football coach at his alma mater, Powhatan High School.

A nationally recognized emerging leader in collegiate athletics, Henderson was selected among 25 senior-level administrators from across the country to participate in the prestigious 2018 NCAA Pathway Program.

The program is designed to elevate those currently in senior-level positions within athletics administration to the next step in reaching their goal of becoming directors of athletics.

Henderson earned his Bachelor of Science degree in marketing from Hampton University while competing as a student-athlete on the football team.

He played defensive back for the Pirates and was a part of a squad that won two MEAC regular-season titles and advanced to the NCAA I-AA playoffs in each of those seasons.

Let’s not forget the option right before our eyes; tapped as W&M’s Interim Athletics Director, there’s no reason that Martin couldn’t be kept on — depending how he performs over the coming months.

It’ll be hard to shake the sting of the Huge fallout, and Martin’s tie to the overall situation, but it’s certainly not outside the realm of possibility for him to succeed in this role.

He has served in the president’s office since 2009, including roles as associate provost and assistant to the president.

He also holds a master’s degree in sports administration. In addition to his Ph.D., Martin received his MBA from William & Mary in 2017.

While pursuing his doctorate at William & Mary, he was a graduate assistant for academic support services in W&M Athletics and continued to work with the department on behalf of the President’s Office.

Martin served as liaison to the university’s Committee on Competitive Excellence in 2015.”

Another former student-athlete (basketball at Houghton), Martin understands the grind — and now with his extensive experience at W&M, he too understands the culture of the College.

As we often say, time will tell; what is for certain is that Martin has an opportunity to endear himself to the W&M community with his response to the current crisis.