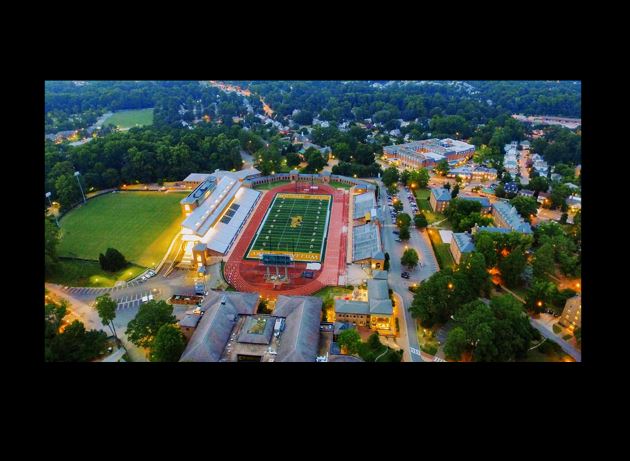 There exists a treasure trove of W&M gridiron stories we couldn’t possibly cover in their entirety, even if we published nothing but W&M Football stories every day for the next year.

Despite that, we can make a small dent — bringing back to life select segments of W&M alum Wilford Kale‘s book, Goal to Goal: 100 Seasons of Football at William & Mary.

At first it was called Mr. Cary’s field. It was the ground upon which a stadium and football history were built.

It is understandable that the stadium, now named for Walter Zable (’37), was designed to blend with the adjacent academic campus.

Its Flemish bond brickwork, Georgian moldings and trim are like the other buildings on the main campus across Stadium Drive.

The architecture blends so well, in fact, that people passing often do not realize it is a football stadium.

This incongruous feature has given credence to the curious tale about the stadium: that it was originally built to accommodate livestock expositions and auctions in the manner of a state or county fair [fitting cattle and livestock through the wide gates/entryway].

A search of the College archives, minutes of the Board of Visitors and official papers of College President Dr. J. A. C. Chandler reveals no written verification of the story.

Many alumni, nevertheless, corroborate the tale.

“That’s how William and Mary got the stadium,” the late Leonard L. Graves, Sr. (’35), a Williamsburg native and longtime resident explained in a 1993 interview.

“The Roosevelt administration offered to help with capital improvements. President Chandler tried to get the PWA [Public Works Administration] to build a stadium, but they couldn’t build a football stadium at taxpayers’ expense.”

Ashton Dovell of Williamsburg, a member of the Virginia House of Delegates and later its speaker, suggested that Dr. Chandler propose to the PWA that an agriculture exposition center be constructed at the College.

According to Graves, the stadium has never been used for a livestock show.

Dr. Davis Y. Paschall, W&M president emeritus, agreed with Graves to some degree and carries the story a step further.

He recalled from his student days, when he waited on the private table of Dr. Chandler, that the president “was quite keen on sports.”

“It was one of the reasons why he encouraged giving prospective athletes jobs in the dining hall. They didn’t have athletic scholarships back then.

So, when the PWA came along, if you thought up a good idea, you could get wheelbarrows and shovels paid for.

Chandler conceived the idea of a PWA project to build a stadium.

I never heard Dr. Chandler use the word rodeo about the facility, but basically I always thought it was a noble idea.

They would have it for agriculture and they could eventually play football in there. Football in those days was not a great big attraction.”

The first football game played in the stadium was held September 21, 1935, between W&M and the University of Virginia.

The stadium had not been completed, and the graceful arcade at the north end, called the most pleasing aspect of the design, was not finished until near the season’s end.

…The architectural firm of John W. Wilson Co. of Richmond designed the facility.

A newspaper account reported that “the huge sum of $170,000 went into the construction of the stadium, with 30 percent of the cost coming as a grant from PWA.”

The College had to pay the remainder.

…Mr. Cary’s Field became known as such through the years in reference to its origins as part of a farm owned by Archibald Cary.

The land was donated by Cary’s family during the administration of W&M President Lyon G. Tyler.

…The football stadium was built in 1935 near the site of old Cary Field, [which] an athletic field with old baseball-style bleachers seating about 500 persons.

As the College began to grow in the late 1920s, Cary Field was moved westward to approximately where the Bryan residence complex is currently located, across the road from the field’s current site.