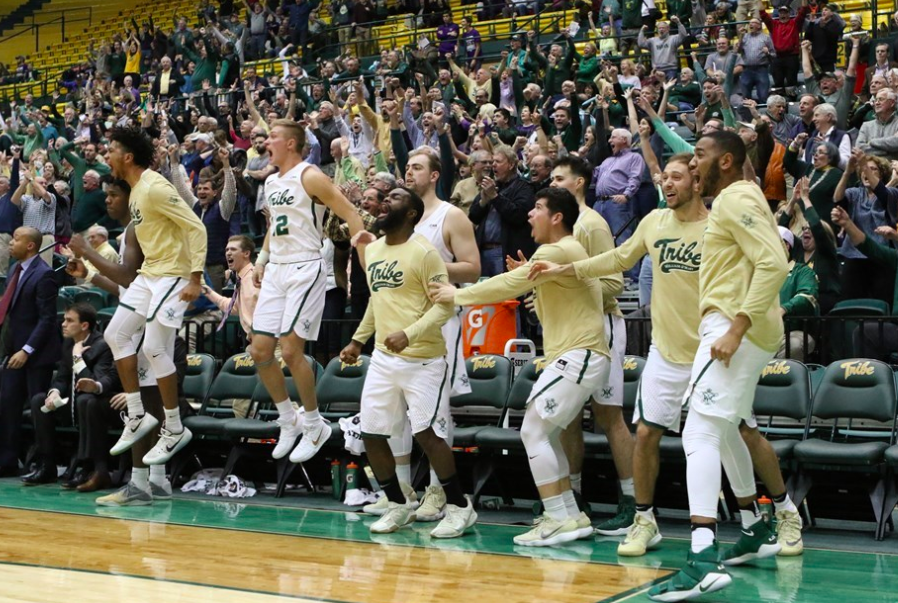 It was a week of ups and down for your W&M Tribe — one that not only saw the Green and Gold mount (yet another) comeback against in-state rival JMU, but it was also one that saw the Tribe drop its first big CAA game of the year. The haters will continue to talk, saying that the Tribe “still hasn’t beaten a ‘good’ team in the CAA.” But as it sits on top of the league with 5 wins in this year’s incredibly competitive CAA, W&M is more than well positioned to wreak some havoc moving forward.

However, there’s one problem: just about every other team in the league is positioned to do the same. Outside of W&M, four teams are a mere one game behind the Tribe in the overall standings. That means that exactly half of the teams in the league are either within one game of first place, or they currently hold first place (of course, that would be your W&M Tribe at the present moment). But we’ll get to a breakdown of the standings later in the article. For now, check out our analysis on this past week’s game, statistics breakdown, and look ahead to next week. Roll Tribe Roll.

WMSB Analysis: #CardiacKids. There’s no other way to describe this one. Remember this year’s ODU game, when Oliver Tot hit a last-second mid-court heave to win the game? Well, this one was pretty darn close. In the first half, JMU played like a team possessed, jumping out to a 20-point lead with just over 5 minutes left in the first half. But guess what? As we’ve learned this season, you should never count out your W&M Tribe. Led by senior captain David Cohn, the Tribe stormed all the way back to tie up the game on a last-second dagger 3-point shot by Matt Milon. Naturally, W&M would go on to seal the deal in overtime in front of its home crowd. Would you expect any less?

Key Stat: Despite shooting just 38.1% from the field, the Tribe made up for it by out-rebounding JMU 51-29; the rebounding effort was led by Justin Pierce, who finished with an insane 17 rebounds.

Tony Shaver: "David Cohn (@dcohn_34) is leading this team with a lot of heart. Without him, we lose by 30 today…this is a miraculous win."

Ugh. This one really hurt. In what was the first truly “tough” CAA contest for the Tribe, W&M was absolutely destroyed in several facets of the game, most notably on the defensive side of the court. Contrary to what the final score might suggest, the Tribe actually led this game by as much as 14 points in the first half. However, once Towson regained the lead just before half, it was all said and done. The Tigers finished the night shooting an insane 59.1% from 3-point land, while also knocking in 64.4% of their shots from the field and out-rebounding the Tribe 30-19. Towson put the league on notice, reminding everyone that despite their poor start, this team was picked to finish #2 in the CAA preseason polls for a reason. So yes, this one really hurt the Tribe, with Towson nearly hitting the century mark on W&M’s home court.

Following a poor shooting night against JMU, as well as a loss against Towson, W&M unsurprisingly cooled off statistically. The team still ranks #1 in several statistical categories, as it did last week, but sees itself on a downward trend in every one of the above categories except one (free throw percentage). What we’re seeing with these numbers is a substantial difference between W&M’s output on the offensive end of the court vs. the defensive end of the court. Offensively, W&M might just be the #1 team in the CAA. However, it might just be the worst in the CAA in terms of all-around defense. As we know, that is not the recipe for success in the CAA. The Green and Gold will only go so far as its defense will take it this year, and Coach Shaver knows it. Ultimately, as good as the team can shoot the ball, it will need to improve on the defensive side of the court if it hopes to take the league by storm this season.

As previously mentioned, your W&M Tribe remains alone atop the CAA this week. However, four good teams are breathing down the Tribe’s neck; those teams are Elon, Hofstra, Northeastern, and Delaware. This week, the Tribe will face two of those teams: Northeastern and Elon. We’re not going to lie, this is a tough stretch for the Green and Gold, as it will certainly be one where we’ll learn a lot about the mental make-up of this year’s squad. Shaver has the tools to make this happen, and we expect good results at the end of the week.

Next up for the

This site began in April 2014, and is run by two William & Mary alums. We represent two of the seemingly few Tribe sports fanatics, but we know there are more out there! On this blog, we produce a mix of long-form journalism, original reporting, and in-depth analysis — especially focusing on Football and men’s Basketball.