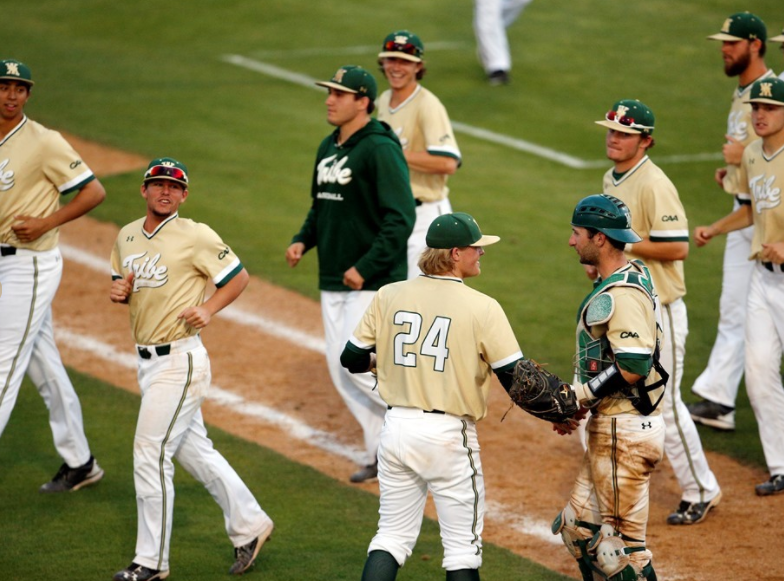 Guess what folks?  It’s that time of year, and your William & Mary baseball team currently sits atop the CAA standings (28-21, 12-6 CAA), tied with UNCW (24-23, 12-6 CAA). The Green and Gold has recently experienced a hot streak that has propelled the team to the top of the league. Since losing 6 straight games in April, the Tribe has been on an absolute tear. The Tribe has won 10 of its last 12 games, going 8-1 in the CAA during that span. In fact, since starting 2-4 in the CAA, William & Mary has gone 10-2 in the CAA. Below, we break down Tribe Baseball’s strengths, weaknesses, and potential to win this year’s CAA. Roll Tribe Roll.

As stated, W&M is 28-21 (12-6 CAA) with just 6 games to go in the season. Typical of W&M sports teams, so it it seems (see football and basketball), W&M is a great team at home, boasting an 18-5 home record. However, this is not the case on the road, sporting a lowly 7-16 record away from the ‘Burg. Specifically focusing on CAA games, W&M is 8-1 at home, and just 4-5 on the road in league play — again proving that this year’s team has been dangerous at home, and average on the road.

To say the least, the final six games of the year have big implications. Upon a quick analysis of the standings, the five top teams all have a shot at the #1 spot. In the final contests, W&M will face off against Northeastern (22-23, 11-7 CAA) and Hofstra (13-32, 6-12 CAA). Northeastern has lost their previous 4 CAA games after being swept by UNCW. While they are going through a rough stretch, Northeastern is a team to be reckoned with, as they were 11-3 and first in the CAA before their recent losing streak. Good news for Tribe fans is that the final series between NU and W&M is at Plumeri Park, where W&M has been proven to be absolutely dominant. Hofstra, on the other hand, has struggled this season, currently sporting a 6-12 record in the CAA. They are, however, riding a two-game win streak, and will be playing at home, in Hempstead, NY. Given the Tribe’s struggles on the road, these games against the Pride will not be shoe ins.

On top of Raquet and Large, W&M also boasts two studs in Ryder Miconi and Ryan Hall. Miconi is third in the CAA in RBIs with 42, and 3rd in walks (31). Ryan Hall is 2nd in the CAA in runs scored (48), and 2nd in doubles (17). This offense is powerful, and has the potential to win games on hitting alone.

From a pitching perspective, W&M ranks 3rd in the CAA in team ERA (5.22). The unit features a four-man rotation of Nick Raquet (4.11 ERA), Dan Powers (4.75), Bodie Sheehan (4.77), and Nick Brown (5.86). Senior Dan Powers has been on fire lately, recently picking up his second CAA Pitcher of the Week award after throwing 7.2 shutout innings, allowing only 2 hits in a 2-0 win and series sweep of the Charleston Cougars. Before that contest, Powers pitched 8.0 innings and allowed just one run against Towson in an 8-1 victory for the Tribe. We hope that Powers continues his dominance throughout the final two series of the season and into the CAA Tournament.

Pitching is always important when postseason play begins. If senior Dan Powers stays hot, and everybody else keeps consistent, we like the chances of W&M in the CAA Championships in Wilmington this season.

As you recall from last season, William & Mary accomplished the impossible in last season’s CAA Tournament. Down 8-1 going into the 9th inning, W&M scored SEVEN runs to tie the game at 8-8 and take it to extras. In the top of the 12th inning, sophomore Cullen Large went yard with a solo home run, putting the Tribe up 9-8; W&M would hold on in the bottom of the 12th, forcing the one-game CAA Championship matchup. The next day, W&M would return and defeat UNCW 14-9 to win the CAA Championship. What a story. The Tribe would of course go on to the NCAA Tournament, knocking out UVA with a 5-4 victory in Charlottesville on their home turf. Could you ask for any more?

This season, W&M looks to go into the CAA Tournament with the #1 seed. It will all depend on how the team plays in its final six games. UNCW, the team tied with W&M, faces Elon and Towson in their final two series. Those two teams are toward the bottom of the CAA, leaving little room for a W&M team looking to lock up the top spot.

Regardless of where W&M ends up in the standings, if last year is any indication, anything is possible once the CAA Tournament begins. What we do know is W&M will come in as a very balanced team with multiple weapons across the board. The Tribe has powerful hitting, strong pitching, and a solid all-around defense. The Green and Gold should come into the tournament confident that the team can win it all, and here’s to hoping they do so! LET’S GO TRIBE!!!