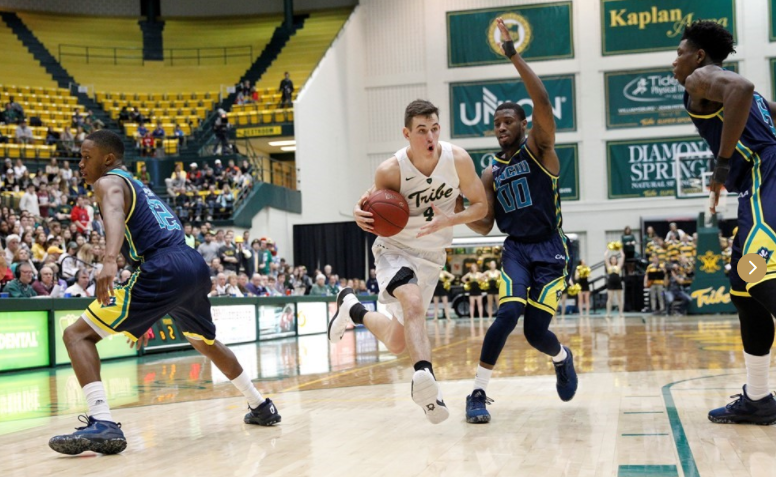 Let’s get right into it. The Tribe has been busy with a lengthy home stand, cranking out three games in the last week alone. We stated in our last CAA update that this stand will likely show the league what sort of team the Tribe will be this season. And boy, do we like what we’ve seen.

After a sub-par start to the year, your Green and Gold has been on an absolute tear as of late, knocking off three straight teams by wide margins, including the top team in the CAA. Below, we analyze the Tribe’s performances over the last few games, including contests against Delaware, UNCW, and Drexel. Roll Tribe Roll.

To start the home stand, William & Mary picked up a much-needed victory at home over the lowly Delaware Blue Hens, who currently sit at  9-14 (2-8 CAA). The Tribe came out of the gates firing, going on a 9-0 run to start the game.

The Blue Hens committed 11 turnovers in the first half alone, shooting just 29.2% from the floor. William & Mary went into the half leading, 35-22. But it was the defense, forcing turnover after turnover, that gave the Tribe the cushion. Certainly not what we Tribe fans are used to seeing out of a typically high-scoring Tony Shaver team.

W&M came into this game ranked last in the CAA in FG PCT Defense. Delaware shot 29% in the first half. Blue Hens also had 11 TOs #RollTribe

W&M appeared sluggish to start the second half, perhaps thinking it had the game in the bag after a strong first half. The Blue Hens would go on a 6-0 run and cut the lead to 7 before a timeout by Coach Shaver.

In fact, Delaware would actually cut the lead to just 3 points with 15:08 to go after starting the second half on a 14-4 run. Thankfully, the Tribe would respond, going on a 14-0 run effectively putting the game out of reach for the rest of the contest. So after an early scare to start the second half, W&M would go on to shoot 64.3% from the floor including 50% from 3.

As previously mentioned, the Green and Gold was also uncharacteristically strong on the defensive end in this one, holding the Blue Hens to just 34.6% from the field, forcing 14 turnovers. The team also held Delaware freshman phenom Ryan Daley, who averaged 24 points over his previous two games, to just 9 points overall.

In the end, the Tribe prevailed over Delaware, 82-58. Daniel Dixon continued his dominance, finishing with 21 points and 7 rebounds. Jack Whitman put up another solid performance and finished with 16 points and 6 rebounds. Omar Prewitt, despite a quiet night in the scoring column (9 points), added a career-high 8 assists and 0 turnovers. This win was very big for the Tribe, not only to get back in the WIN column, but Northeastern and Charleston also lost–two teams that W&M wants to creep up on in the standings.

Up to this point in the season, UNCW has been the cream of the crop in this year’s CAA. Coming into this contest, the Seahawks boasted an eye-popping 20-2 (9-0 CAA) record. Even Tony Shaver remarked that they had already reached the 20-win mark this early in the season, a remarkable feat in itself.

Earlier in the year, when the Green and Gold ventured to Wilmington, the Seahawks came out on top by a wide margin, walking away with a strong victory, 101-77. However, on the back of a resurgent Omar Prewitt and a (continuing to be) red hot Daniel Dixon, the Tribe  shocked the CAA world by rocking UNCW in Williamsburg, winning by nearly 20 points, 96-78.

W&M jumped out to an early lead, getting ahead by as much as 8 points with just over 11 minutes left in the first half. W&M would never relinquish the lead in this one. Not once the entire game. Several times UNCW came back and closed the gap, even trailing by 5 with 16 minutes to go in the second half — but with every UNCW streak, the Tribe had an even greater answer. Have we mentioned that senior captain Omar Prewitt is really good at basketball? Oh yeah, he is. Following an average start to the season, this game truly was his coming out party; last year’s leading scorer finally came alive at a time when the team needed him most, against the top team in the league.

Prewitt clicked the entire game, dropping bucket after bucket — whether he was driving to the lane, shooting the outside three, or dishing the ball out, he truly couldn’t be stopped. On the night, Prewitt finished with 28 pts, 7 rebounds, and 4 assists. Behind him was fellow senior captain Daniel Dixon, who finished with an equally impressive night, 27 pts and 4 rebounds. Wow.

But guess what? Prewitt and Dixon weren’t done yet. And they don’t plan to be until the Tribe is dancing. Following the huge win over UNCW a couple days prior, the Green and Gold faced Drexel (8-15, 2-8 CAA). Not wanting to be caught napping, or looking ahead to the next contest vs. Northeastern, the senior captains set a tone for the game that the Dragons absolutely couldn’t keep up with.

Paced by a cool 32 points from Daniel Dixon (THUMP…that was our jaw hitting the floor) and Omar Prewitt’s 24 points, the Tribe rolled in this one. But that isn’t to say it was easy all the way throughout. In the first half, Drexel played W&M close, as the Tribe took a mere 1-point lead into half, 45-44.

Whatever halftime speech Coach Shaver gave worked, because from that point on, the Tribe would go on to play the best 20 minutes of basketball it has played in perhaps the last few seasons, lighting the Dragons up for 63 points in the second half. In the end, it was all Tribe, 108-85. But it wasn’t just the Dixon-Prewitt show (who, by the way, finished a combined 11-14 from three), as several Tribe players chipped in. Jack Whitman, David Cohn, Paul Rowley, Nathan Knight, and Connor Burchfield all finished with 8 points apiece, with Whitman adding 6 rebounds, Cohn 6 assists, and Rowley 3 blocks.

If Prewitt and Dixon are on, and all of W&M’s role players do their job, there is literally no telling what this team is capable of. Oh wait, yes there is. With those two on, the team knocked out the top team in the CAA — nearly hitting the century mark. The team would also blow out two lesser CAA opponents in a surgical fashion. Any way you look at it, as Prewitt and Dixon go, so will the Tribe this year. And if that’s the case, we like our chances.

Next up for the Tribe