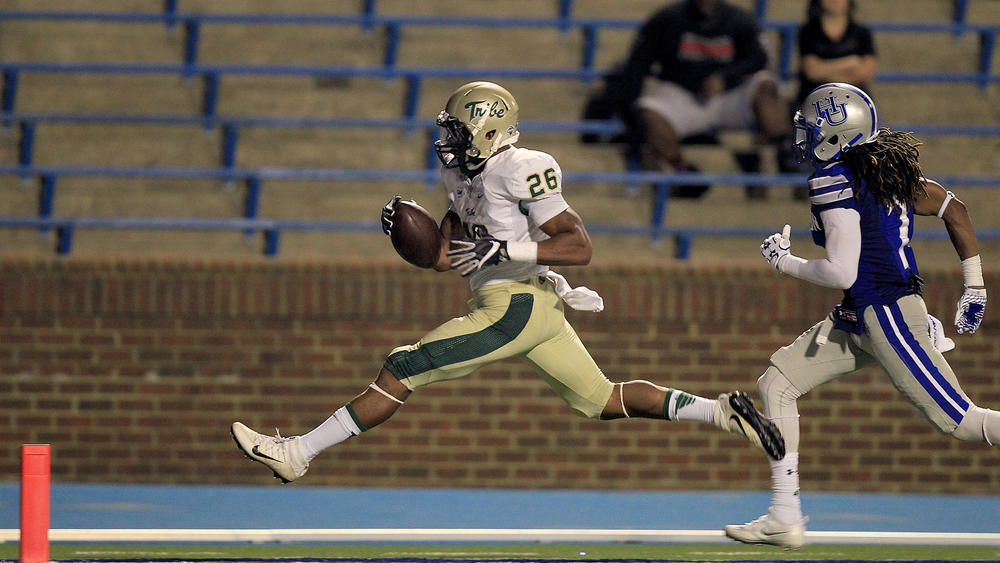 That’s all she wrote folks! After a painful first half, W&M finally put some solid drives together to end Hampton’s upset attempt. It wasn’t pretty, but a win is a win; the Tribe advances to 1-1 on the season following a game-one loss at NC State. With the W, the Tribe finds itself in the win column for the first time this season, continuing its march forward in out-of-conference play. With CAA games just around the corner, the Green and Gold still has a few kinks to figure out. Preferably sooner rather than later.

This year, we at the W&M Sports Blog have decided to slightly modify our recap articles. Rather than offer a play-by-play/quarter-by-quarter recap of the game (which can always be found at several prominent news outlets, such as the Daily Press & Tribe Athletics.com), we’d rather offer you our analysis! Toward this end, we’ve adopted and built upon a very solid recap structure, as used by the infamous JMU Sports Blog (shout out to our CAA brethren), featuring “The Good, The Bad, & The Ugly.” So without further ado, let’s talk Tribe Football!

The Good: Last week, W&M’s redshirt freshman and first-year starting safety Corey Parker went off against NC State. Parker finished the game with an insane 15 tackles and 1 interception against the Wolfpack. All of this resulted in Parker being named not only the CAA Rookie of the Week, but also the STATS FCS Freshman Player of the Week.  The converted cornerback turned safety continued his ways against Hampton this week, finishing with 4 tackles and an interception, which he returned for 44 yards. Wow. Do we have any more cornerbacks that we can convert to safety?

Another star on Saturday: DeVonte Dedmon. Dedmon wreaked absolute havoc on the Hampton defense, continually shredding the Pirates on short, medium, and deep routes. He would finish the game with 7 receptions for 176 yards and one touchdown–his yard total marking a career high. DeVonte is unquestionably the most talented player on this year’s offense, and let’s not forget to mention his punt/kick return abilities. W&M’s offense will likely flow through Dedmon from here on out. Another bright spot on offense was redshirt freshman RB Albert Funderburke. Mid-way through the game, starting RB Kendell Anderson left the game, presumably due to injury. Funderburke stepped right in and shined, finishing with 5 carries for 69 yards and 1 TD. His touchdown came on an impressive 40-yard outburst to the house. If Anderson can come back healthy, W&M might just have a two-headed monster moving forward in the run game.

After 2 weeks, @DeVonte_Dedmon is 2nd in the CAA and 7th in the nation with 251 receiving yards #Sticks #Beast

The Bad & The Ugly: Where was W&M’s offensive efficiency in the first half? QB Steve Cluley, while not throwing any interceptions just looked off. There were errant overthrows, misreads, and some throws completely off the mark–one throw over the head of 6’5″ tight end Andrew Caskin particularly comes to mind. How do you overthrow Caskin! However, Cluley would settle down in the second half, finishing with 302 yards and 2 touchdowns. As CAA play begins, W&M can’t afford slow starts, especially as this year’s team will likely rely more on its offense than it has in years’ past. A lot will be expected out of Cluley against Norfolk State next week, and in the weeks to come. We know he’s a seasoned veteran, so there shouldn’t be too much to worry about. Look for Cluley to up his game in week 3.

W&M could not consistently stop the run in this game. Against Hampton, a team not known for its running prowess, the Pirates’ starting RB shredded the Green and Gold defense for 115 yards on just 12 carries. Another Hampton running back added 48 yards on the ground. With turnover on the defensive line this year (losing senior Tyler Claytor) and at the linebacker position (Luke Rhodes, Zach Fetters, Ian Haislip), this wasn’t totally unexpected. Nonetheless, when CAA play gets going, the Tribe will have to have some of these issues solved.

Around the CAA: #2 Richmond looks like a serious contender for the National Championship this year, blanking the Norfolk State Spartans 34-0 in week 2. W&M will take on Norfolk State next week. In the season’s first CAA contest, the Albany Great Danes took out the Rhode Island Rams 35-7. The James Madison Dukes also look particularly strong this year, posting a 56-point win over lowly Central Connecticut State. The Dukes were led by a menacing ground game, which posted over 300 rushing yards and two rushers going over the century mark. Villanova and Delaware both notched victories over Patriot League foes Lehigh and Lafayette, respectively.

CAA Standings: It’s early. CAA play hasn’t even started yet, but several teams CAA have already shown promise. Currently, 5 CAA teams are ranked in the FCS top-25: #2 Richmond, #12 JMU, #13 W&M, #22 Villanova, and #24 New Hampshire–with Towson, Stony Brook, Albany, and Delaware all receiving votes. This year’s CAA will again be tough, as is typically the case. The Tribe will have its hands full week in and week out, and with just one more out of conference game before CAA play, W&M will need to ensure it’s locked and ready to go come week 4 vs. Elon on Family Weekend.

Look Ahead: This Saturday, W&M will take on Norfolk State in the Tribe’s Home Opener, which will feature a completely renovated/redone Zable Stadium!..Do you have your tickets yet?! The Tribe will surely be ready for this one, as they look to put together a full game with solid performances in all three phases. Be on the lookout for our preview article in the coming days, as we scout the Norfolk State Spartans. And get ready for the HOME OPENER. LET’S GO TRIBE!!!