We all know that unless a CAA team goes undefeated in the regular season, there’s little to no chance that any of them will receive an at-large bid to the NCAA Tournament. It’s simple: win the CAA Tournament and you’re in. No questions asked.

Even though games against CAA opponents are most important, early-season out of conference play is crucial for things like: solidifying the team’s rotation (whether that entails a 7-man, 8-man, etc. rotation), getting off to a hot start and gaining team chemistry, and getting out alive without any major injuries. For those reasons, it’s crucial that the Tribe perform well in the early stages of the season, in out of conference play–setting the squad up for a deep conference run come early January.

Through the first 10 games of the season, the Tribe sits pretty with a glowing 7-3 record (5-0 home, 2-3 away)–which includes all out of conference games. With just one out of conference game left against Central Michigan, conference play starts New Year’s Eve vs. Towson. But just how has the Tribe been getting it done? Who has led the team in scoring, who has been getting all the minutes, and who is emerging as a diamond in the rough? Let’s analyze some key statistical categories through the first 10 games of the season and find out. 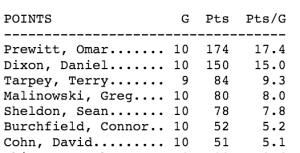 Juniors Omar Prewitt and Daniel Dixon have led the way for W&M in scoring this season, averaging 17 and 15 points a game. Prewitt is currently 5th in the CAA in scoring, and Dixon is tied for 10th. Directly behind them is senior captain Terry Tarpey, averaging just under the double-digit mark at 9.3 points per game. After Tarpey, sophomore Greg Malinowski and senior captain Sean Sheldon both check in with around 8 points per game. Sheldon has been much better about getting the ball in the hoop so far this year, having established a good cut-to-the-basket move. Put simply: when Sheldon has a big game, we win.

Burchfield‘s stats aren’t too far behind. Burchfield has emerged as one of those “diamonds in the rough” we alluded to at the beginning of this article. As you can see, he has connected on a staggering 57.9% of his 19 three-point attempts. He truly does remind us of a Julian Boatner-type player, who has the potential to one day be near the top of the CAA in 3-point percentages, if not this year. We’d like to see him shoot even more from beyond the arc. 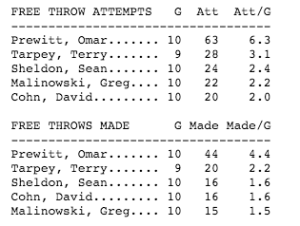 Who is great at getting to the charity stripe on this year’s team? Omar Prewitt has found himself at the free-throw line for an eye-popping 63 shot attempts; the Kentucky-native has a knack for putting his head down and getting the the rack. He averages 6.3 free throws per game. Behind him, Terry Tarpey has also shown that he can drive and draw the foul, averaging 3.1 free throws per game.

In terms of assists this season, it may come as no surprise to many that W&M’s transfer from Colorado State David Cohn leads this year’s team–his assist average per game is good enough for 7th in the CAA so far. The electric guard has proven himself a great spark-plug for the offense–constantly pushing the tempo, making the extra pass, and hyping up the squad. Cohn has contributed well to the team during his first year in Williamsburg, and we look forward to him develop even more as the season moves forward.

seen a player like Tarpey: at 6’5″ 210 pounds, he isn’t the biggest player on the court, but he somehow always seems to come down with the ball when the Tribe needs it most. Tarpey is currently 3rd in the CAA in rebounds per game. Additionally, in some incredibly clutch moments, Tarpey has been known to force a steal, drive down the court uncontested, and give the Tribe an extra two points it desperately needed (read: ODU game). The captain epitomizes the toughness that this team has become known for, as he averages a truly insane 3 steals per game–good enough to get him ranked #1 in the CAA in that category. We couldn’t ask for anything more in a senior captain than Tarpey. Oh, and let’s not forget he also leads the team in blocked shots per game. He can do it all.

The first five in Prewitt, Dixon, Tarpey, Cohn, and Sheldon have emerged as the starters this season, with Malinowski, as expected, serving as the 6th man. Whitman checks in as Sheldon’s primary backup, while Schlotman, Burchfield, and Tot vie for time as the second guard substitution. Burchfield, as noted, has been strong this season.

Tot, one of our favorite emerging players from last season, was hampered with an early season injury and hasn’t gotten a lot of playing time yet. We hope he gets more minutes as conference play opens. A coach favorite, Michael Schlotman has played better than he did last season, but still leaves us wanting more–especially on the offensive side of the court. Any way you look at it, this group will form the core rotation heading into conference play, and will be the workhorses from here on out. There’s depth across the board, and this group can get it done.

This year’s team has incredible potential. With depth across the board, senior leadership, and great coaching to get the job done, it’s up to the Tribe to execute. This year’s CAA is very strong, as 8 out of the 10 teams currently sport winning records. It won’t be easy, but the Tribe has the pieces in place to finish out on top. LET’S GO TRIBE!!!