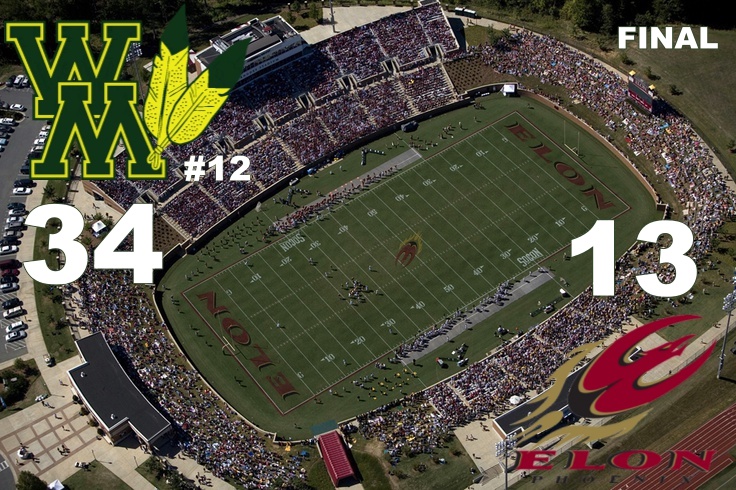 FIVE wins in a row. You read that correctly: FIVE in a row for your William & Mary Tribe. The Green and Gold stormed out of the gates, jumping out to a strong halftime lead. The team would sputter in the second half, but still hold on for the convincing victory. To make things even better, as Saturday ended, the Tribe found itself sitting atop the CAA standings, tied with its arch-nemesis Richmond Spiders for FIRST place in the conference.

Game Summary: As stated, the Tribe really did come out of the gates firing on all cylinders. It didn’t even look like Elon was in the same league. The first half ended with a staggering 27-0 score, as both the offense, defense, and special teams stepped up to the plate for the Tribe. On the offensive side of the ball, W&M was able to establish a solid run-pass balance that would serve itself well throughout the first half.

The first Tribe touchdown came courtesy of a 19-yard Kendell Anderson burst, capping off a 9 play, 69 yard drive. The second touchdown was scored by senior running back Mikal Abdul-Saboor on a one-yard plunge into the end zone. Adding to Elon’s tough first half was DeVonte Dedmon‘s incredible 70-yard punt return for a touchdown, which came courtesy of a bone crushing pancake block toward the end of the return. At the end of the first quarter, the score read: Tribe 21 Phoenix 0. Ouch.

In the second quarter, the Tribe was able to manufacture a couple solid drives, but couldn’t find the end zone. These two drives resulted in two Nick Dorka field goal conversions of 34 and 35 yards apiece. These offensive stalls would be sign of things to come in the second half. At the end of the first half, the Tribe was already up 27-0. The offense put up points, special teams contributed in both the kicking and return game, and the defense forced two fumbles en route to a first-half shutout.

However, on both sides of the ball, the second half did not go nearly as well. Midway through the 3rd quarter, Elon scored on a long, sustained drive that took the Phoenix 92 yards down the field. Nothing was clicking for the defense, and everything seemed to be working for the Phoenix offense. Perhaps the Tribe knew it had a substantial lead, but either way, the drive was absolutely horrendous for the defense.

To pick up the slack, senior linebacker Zach Fetters came down with an amazing tip-toe interception on a following Phoenix drive to put the ball back in the hands of the offense. It truly was an amazing catch, and one that we would never expect a linebacker to make. This interception set the offense up nicely, and resulted in the Tribe’s only points of the half when redshirt freshman Matt Sniezek took a pass from Steve Cluley and scampered 33 yards to the house. This was Sniezek’s first touchdown in his collegiate career, and we hope to see many more from him in games to come.

In the 4th, W&M would give up yet another long drive on defense, capped by an Elon rushing touchdown. It was hard to watch, but the defense seemed off yet again on this drive. But as the final minute wound down, the Tribe would leave the field with a 34-13 victory, extending its winning streak to 5 games.

The Good: The first half. The Tribe’s 27-0 lead turned out to be an insurmountable amount for this young Elon team to overcome. The Tribe was firing on all phases, and truly did dominate the game. In the absence of wide receiver Christian Reeves, it was also nice to see several receivers step up: Daniel Kuzjak and Andrew Caskin in particular.

We also can’t help but love it when guys like redshirt freshman Matt Sniezek record their first touchdown in a Tribe uniform. Overall, to say W&M’s receiving core has performed well this season would truly be an understatement. After losing Tre McBride and Sean Ballard to the NFL and graduation last season, we never would have imagined our receivers to be this strong. But they have been.

The Bad: The second half. W&M was outscored 7-14 in the second half, and was only able to score one touchdown. The offense kept its starters on the field, and Elon’s defense shut the Tribe down. W&M had a hard time establishing the run, especially in the second half, as Kendell Anderson was held to just 68 yards rushing. A far cry from the 100+ he is averaging this year.

On the defensive side of the ball, we expected a little more in the second half. Elon was able to rattle off two long, sustained drives in which W&M’s defense looked like it was playing against a high-powered offense. As we know Elon’s offense is far from high-powered, we couldn’t help but wonder what was going on.

Injury Update: Wide receiver Christian Reeves did not play in this one. Luke Rhodes continues to hum along, despite his knee injury. He looks like he hasn’t missed a beat, and was included in our top performers for the week.

Around the CAA: Delaware lost to Albany, making W&M’s loss to the Blue Hens earlier this year that much worse. If the Tribe had beaten Delaware, W&M would currently be on a 7 game win streak, with only one loss against UVA. Oh well, it’s in the past. However, in a game that ended very well for the Tribe, UNH pulled off the upset at home and beat the #5 Richmond Spiders. This is huge for W&M, as the Tribe already beat UNH this year (that win now looks even better), and more importantly, W&M has moved UP in the CAA standings (see below).

CAA Standings: With Richmond’s loss to UNH, William & Mary is now TIED with the Spiders for FIRST place in the CAA. Both teams maintain 7-2 overall records, with 5-1 CAA records. JMU, Towson, and Villanova are all just one game behind the Tribe.Towson should not be overlooked this coming Saturday. Look Ahead: William & Mary has Towson next on the docket, and will need to avoid a trap-game scenario heading into the season-ending showdown against Richmond. Regardless what happens in the Richmond game, if W&M beats Towson this week, the team should be assured (knock on wood) a playoff spot this year, breaking the 4 year playoff drought. Towson technically sits at 2nd in the CAA (with two other teams), and is very much so in contention for the CAA crown. Can W&M do it? No doubt. LET’S GO TRIBE!!!